Review: The Cabin by Smoky Zeidel 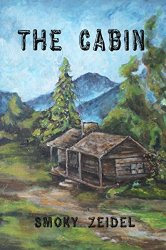 “James-Cyrus Hoffmann has just inherited his grandfather's farm, and with it a mysterious cabin deep in the woods on Hoffmann mountain, a cabin he has dreamed about since childhood. When James-Cyrus enters the cabin, he is vaulted back through time to the Civil War era, where he meets Elizabeth, the brave young woman who lives there, and Malachi, a runaway slave.

James-Cyrus' neighbor, Cora, knows all too well the tragic history of the cabin. When James-Cyrus tells Cora about Elizabeth, Malachi, and his fantastic vault back through time, the two devise a plan to change the past and right a wrong that has haunted the Hoffmann family for generations. But can they find the key to unlock the past in time to change what history said happened to Elizabeth and Malachi?”

The Cabin was a captivating story that drew me in quickly and wouldn’t let me go. Set in the Allegheny Mountains of Virginia, where there was a deep connectedness that transcended the tangible between the women and the land. Catherine and Corrine are sisters who inherited a strong connection between each other as well as the land. Their grandmother, who was part Cherokee Indian, called it mountain magic as she taught them to respect the spirits of water, stones, trees, and plants. The story starts in the pre-Civil War era of 1846 with the birth of Elizabeth to Corrine, she also had a toddler son named Cyrus. Catherine’s talents were in midwifery and she stayed on to help William with the kids after Elizabeth’s birth while Corrine recovered from her difficult delivery. William was a traveling preacher who made rounds regularly and was often gone for long periods of time. When Corrine was feeling stronger she felt the pull to spend some time in the woods gathering slippery elm, other stock herbs, and mushrooms. After filling her basket, but before she headed back, she uncovered a fairy stone. Marveling at its cross shape she decided to take it home as a gift for William.

The story is compelling and mysterious as the plot moves forward and a couple of unforeseen twists complicate some matters considerably. The descriptive scenes are well written and easy to suspend disbelief as the scenes and conversations between the characters were written realistically. I found this an amazingly wonderful story of family love and possibilities beyond the expected.

No significant issues with formatting or proofing.