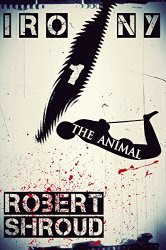 Detective Reginald Thomas' career was going well. Then after a questionable shooting, his life starts to fall apart. His wife leaves him. The powers that be are reining him in and watching his every move. If it weren't for his partner, Reuben, who always has his back, and the comfort of a bottle, Reg would all alone.

Bay City has a maniac on the loose. Dubbed The Animal, the women in town hardly dare go out at night. Reg sees his chance for redemption. If only he can catch The Animal.

Robert Shroud is a New York based writer. He has two other books, plus a subsequent book in the Irony series available.

The Animal is terrorizing the women of Bay City, raping and then hanging them. Protagonist Detective Reg Thomas is flawed and very human. A man I found myself liking enough to want to see him succeed in his quest for redemption by bringing in The Animal. A solid, unique story, marred by typos, more than a few sentences in need of an editor's touch to unravel, and an occasional propensity to head hop.

An abundance of typos and convoluted sentences. This story deserves a good going over by a copy editor and proofreader.

Forgive me, please, but you've provided the best laugh of my day with one little typo. "The Animal is terriorizing the women..." Because he's a terrier? Is he Boston-terrierizing, or Irish-terrierizing? I'm imagining a little, wiry dog like Asta, yapping at every woman he sees.

LOL. Thanks for the laugh Gayle (and for pointing that out). I've fixed it, so future readers will have to figure it out from your comment. :)