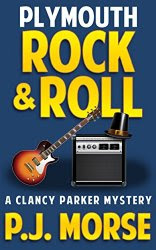 Clancy Parker heads to the New Pilgrim Music Festical to play with her band, but while she is there she helps another band whose frontman gets into trouble with the law. Clancy has to find him before the police so his band could headline the music festival. Of course, there are others looking for Justin Hollander, including a group who wants him dead.

P.J. Morse has published three books within the Clancy Parker Mystery series. Morse lives in California and has a love for rock n’ roll.

P.J. Morse’s third Clancy Parker mystery novel takes the rock and roll to heart as the story is staged during a rock festival in Massachusetts. Clancy is looking to have a great weekend with her bandmates, free of any drama, but she immediately runs into an old flame, Patrick, and there still might be feelings.

However, the flirtations are put on hold as the frontman for Patrick’s band gets himself into trouble with the law and then disappears. Clancy decides to help Patrick because – as a detective it’s what she does – but she also knows the streets of her hometown better than anyone else.

The book is filled with quirkiness and a lot of fun. The bandmates take a larger role and it feels like a team effort to get to the resolution rather than having Clancy do it on her own. It’s good to see her friends come to her side and work with her as they all seem to have a knack for something crucial in the investigation whether it be searching the Internet and social media, or dancing on top of tables.

For fans of the New England area, they will enjoy the scenery in the book. Clancy pretty much goes on a tour of Boston and winds up at a number of historical and touristy areas. It plays a role as one of the characters in Plymouth Rock & Roll.

One thing I do love about Clancy is her loyalty. Her friends and family are high on her priority list and she will do whatever it takes to help and protect them. That may lead her into some sticky situations, but you know her heart is in the right place.

While some of it can get a little messy (machetes, anyone?), Morse manages to keep the book lighthearted and add plenty of comic relief along the way. This was a fun, quick read.

This is the third book in the a series, but can be read a standalone.