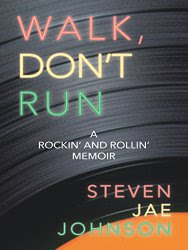 “Here is a story that is glamorous, inspiring, and gritty — a marvelous fusion of the ups, downs, and in-betweens of life and music and passion in 1960s Hollywood, California, the place where dreams are made and chased and, sometimes, die.

When Steven 'Rusty' Johnson, Eddie Olmos, and Joey Zagarino met in high school in 1962, the sky was the limit and rock ‘n’ roll stardom was a record deal away. These three friends forged a life-long friendship that would take them through triumph and tragedy, victory and defeat, success and failure — all in the pursuit of reaching the rock ‘n’ roll dream.

This is not only the story of three dreamers, it is a true tale that shows that success — and life — is about taking it from the top, catching a good groove, and taking it one beat at a time.”

Steven Jae Johnson is a musician, film maker, screenwriter, and actor, among many other roles he's filled in his long, varied career in music, TV, and film. This is his first book.
Appraisal:

One of the quotes plugging this book calls it “this generation's American Graffiti” and also calls it “Happy Days slammed into Resurrection Boulevard.” That comparison is helpful in many ways except for the obvious difference, that unlike the movie and TV shows, this story is real.

It is the story of a group of kids, growing from teen to young adults, finding their way in the world. You'll find both humorous and inspiring sections. The characters, although real in the book, are also fun people you wouldn't mind hanging out with. It even has a larger than life character like “The Fonz” in Eddie Olmos, better known today as actor Eddie James Olmos.

If you're into memoirs or biographies of rock bands and musicians, Walk, Don't Run is a read you should enjoy. I did. If you have a thing for the 60s, you'll find something to like as well.

A very small amount of adult language and situations. (Much less than I'd anticipate in a rock and roll memoir.

A small number of typos. A few of them were errors in a song title or the proper spelling of the names of other musicians.