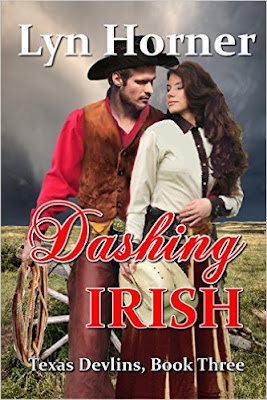 Originally trained in the visual arts, Lyn Horner has worked as a fashion illustrator and an art instructor for Art Instruction Schools (famous for their “Draw Me” heads). Looking for a creative outlet after her kids left home, she started writing. The Texas Devlins series consists of three books; the first is White Witch, the second is Darlin' Irish, the third is Dashing Irish. She also has a Kindle-ready memoir, Six Cats in My Kitchen. For more information, visit Horner’s website.

“Dashing Irish [originally title Dashing Druid] continues Lyn Horner’s unique Texas Devlins saga. This sensual western romance stars Tye Devlin, the eldest of three psychically gifted siblings. Descended from legendary Irish Druids, Tye is an empath. He ‘feels’ others’ emotions. Over time, he has learned to block out most of the ‘racket’ in order to save his sanity, but when he meets cowgirl Lil Crawford, he has no defense against her hidden pain.”

“Set in the 1870s, against a backdrop of ranch life and an iconic cattle drive, this epic love story pits Tye and Lil against dangerous enemies and their own feuding families as they fight their personal demons. Will they decide love is worth the consequences? Will Tye’s gift turn out to be a blessing or a curse?”

I enjoyed Darlin’ Irish (originally titled Darlin' Druid), the first book of this series. Its combination of a solid western romance storyline with a unique twist on the formula, provided by the infusion of a significant amount of the supernatural was a fun read that was very different. Dashing Irish continues the story, this time focusing on Tye Devlin, the brother of the heroine in the first book, and the romance that kindles between him and a neighbor who has a history with his new brother-in-law.

Posted by BooksAndPals at 9:35 AM