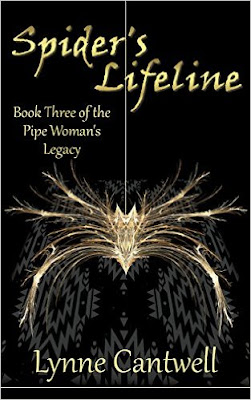 Description:
Webb Curtis lives in anticipation. His relatives do amazing things as a matter of course. His mother is Naomi Curtis, who facilitated the Gods’ power-sharing agreement that led to Their return to Earth. Older sister Sage saved the Earth by kicking the gods into action on climate change.

And Webb? Knitting is his superpower. He also knows the future, but only when he’s not directly involved. Now thirty-five and with a baby on the way, he is trying to find his place in the world. But his task will be complicated by a smoky interloper, an Icelandic princess, a tiny golden spider -- and Ragnarok, a.k.a. the end of the world. Not even Webb himself could have anticipated this...

Author:
“Lynne Cantwell is a contributing author at IndiesUnlimited where she shares her knowledge about Indie publishing and promotion. She has a master’s degree in fiction writing from Johns Hopkins University and is a former broadcast journalist who has written for CNN and Mutual/NBC Radio News, among other places. Ms. Cantwell currently lives near Washington, DC.

You can learn more about Ms. Cantwell’s other books at her website or stalk her on Facebook.

Appraisal:
Spider's Lifeline is the third volume in the Pipe Woman's Legacy series and begins several years after the ending of Firebird’s Snare. At first I was a little disappointed to learn that Webb was now thirty-five years old. I suppose I wanted to watch him grow up. This book, however, has moved beyond a coming of age tale, instead dealing mainly with Norse mythology, concerning Ragnarok "Fate of the Gods," and Native American legends.

Webb does an excellent job setting up this story as well as filling in any background information we need to know. The story was mainly told from his first-person point-of-view with a few occasional point-of-view shifts to Sage, whose current mission intertwines with Webb’s nightmares. Several players are brought back into the mix to complicate and or help in the situation at hand. There are also a couple of new players woven in to make things even more interesting. One character has pleasantly surprised me and I eagerly wait to hear more about Antonia’s and Brock’s youngest son, Roman. He may well turn out to be an unsuspected ally. The other is the hereditary princess of Iceland, Ingrid Ingunnardottir, who seems to be causing disruptions on cosmic levels. Ms. Cantwell has indeed woven a tangled web.

I suspected as the story branched off into related story arcs—or strands of a web, if you don’t mind me saying—that there was no way to bring this book to a satisfying ending with Ragnarok looming. This story alludes to a disagreement between the Gods on a cosmic level that is starting to spill over into the mortal realm and might bring forth the end of the world. On the home front, society is breaking down and Sage is, yet again, conflicted about the role the Gods have chosen for her. This is also causing tension between Naomi and Sage as well.

One of the aspects I liked about Ms. Cantwell’s storytelling, which shines in this series, is the seeming role reversal of Sage and Webb. Sage’s patron, being the Phoenix, is outwardly more physically protective and aggressive. While Webb, being Heyoka—the sacred clown in the Lakota tradition—tends to be more introspective and creative. I love the unassuming air he exudes throughout this book. Despite the critical importance of this story to the series, Webb’s voice is light and easy to read. He is my favorite character of all and I loved getting to know him better.

If you are a reader who has aversions to cliff-hangers you may wish to wait for the next book to be released before reading this one. I could see it coming as there were many strands to this tangled web that needed resolving. I felt like I knew this author well enough that she wouldn’t let the story suffer by closing things up too quickly. So for that I was thankful. Now, I can’t wait for the next addition to this series. Hurry hard, Ms. Cantwell.

FYI:
Spider's Lifeline is Book 3 of the Pipe Woman's Legacy series. While this book could be read as a stand-alone, because Ms. Cantwell does an excellent job filling the reader in on pertinent info, do yourself a favor and read book 1, Dragon’s Web, and book 2, Firebird's Snare.

I need to add a warning here, there were several F-bombs dropped and sexual abuse, including a mildly graphic rape, for those who have sensitivity in these areas.


Posted by BooksAndPals at 9:56 AM