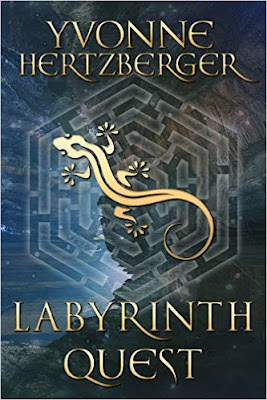 Description:
While gathering food in the desert, M’rain, a young maiden, stops to rest in the mouth of a cave. She is captured and held by a mad man who has enslaved a small band to mine black rock.

Glick, a magical lizard guardian of the caves, charges M’rain with rescuing all those held in the labyrinth of caves and restoring them to their home village. But M’rain only wants to go home. Part way through her quest she meets P’puck, a young man who is immediately smitten with M’rain. But she is not interested, nor is she free to decide her future until she completes her quest.
M’rain must navigate the treacherous caves and face her own fears to save the prisoners as well as herself.

Author:
“Yvonne Hertzberger is a native of the Netherlands who immigrated to Canada in 1950. She is an avid student of human behaviour, which gives her the insights she uses to develop the characters in her writing. Hertzberger came to writing late in life, hence the self-proclaimed label 'late bloomer'. She began writing at the 'old' age of 56.

Her first Old World Fantasy novel Back From Chaos: Book One of Earth's Pendulum was published in 2009. The second volume Through Kestrel's Eyes is available and the third and final volume The Dreamt Child is now published. Hertzberger has contributions in Indies Unlimited: 2012 Flash Fiction Anthology and Indies Unlimited: Tutorials and Tools for Prospering in a Digital World. She is a contributing author to Indies Unlimited.”

Appraisal:
I found the characters to be well-developed and Ms. Hertzberger’s fantasy world is described so aptly, I had no problem immersing myself into the scenes. K’kor was a desperately evil man who sought greatness by using and abusing others. He ruled a small group with a heavy hand and used their fear against them. Glick, the guardian spirit of the labyrinth of caves, was everything I expected him to be. He was illusive and cryptic in his communication with the main character M’rain, which caused her to seek answers within herself. M’rain had a strong personality; she was opinionated and let her expectations be known when she communicated with P’puck and the elders of his tribe.

I have some mixed feelings about this story. There was no great conflict or obstacles for M’rain to overcome, except for those that were within herself. Normally I would have no issue with that, but the story did not live up to the build-up of the dangers of the labyrinth. Glick guided and protected her during her physical quest through the caves. He also provided food substances and water throughout her travels. Despite the lack of challenge, the story moved along at a decent pace.

My problem with this story doesn’t arrive until M’rain and P’puck finally make it through the cave to M’rain’s tribe. It is time for M’rain to go through her woman’s rite of passage. I do think the details of this rite of passage were too graphic, and this is where I felt like M’rain’s character did not ring true. If the details had not been provided, it would have been easier to accept her nonchalant behavior after the rite. Perhaps if Ms. Hertzberger had set up the rite of passage better it wouldn't have seemed so shocking to me, or to others who may be sensitive to situations like this. Did M'rain know what to expect? Had she discussed this rite of passage with her mother or older sister? Even if she had recalled rumors from those who had gone before her, I think I would have felt better about it. She had been so strict with P’puck about not having any physical contact with her. Why would she find it so easy to allow these elder women of the tribe to violate her the way they did? She had to stand up to the elder men of her tribe to even seek council with them because she was a woman. But she didn’t stand up to the women? I can’t imagine this strong, young woman who fought so hard to be heard as an equal, with both tribes, just accept this treatment without some rebellion. So, I have some issues about the way this part of the story was told.

I also ran into some editing or proofing issues that I had trouble getting past. One was the overuse of the words she/he had had, which would have read better as she’d had or he’d had. Here are a couple of examples:
She had told him to bring his spear and had had him fashion one for her as well.
If she had had any doubts about her earlier decision the choice had now been taken from her.

In my opinion another round of proofing or copy editing would serve this book well, and I’ve had to deduct a star because of that.

That being said, the book is not without merit and I finished it quickly. I enjoy stories about early civilizations with strong characters. Learning their myths and legends while adding magical realism adds to the wonder of it all. If you are entertained by these type of stories you might enjoy this one as well.

FYI:
One scene, the woman’s rite of passage I mentioned above, may be offensive to some readers. Ms. Hertzberger uses Canadian spellings.

Format/Typo Issues:
I found a few too many proofing misses for my comfort.

Posted by BooksAndPals at 5:19 AM