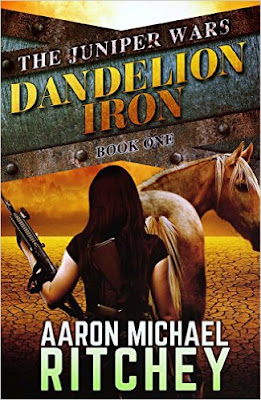 Description:
“It is the year 2058. The Sino-American War has decimated several generations of men, and the Sterility Epidemic has made 90% of the surviving males sterile.

Author:
“Aaron Michael Ritchey was born with Colorado thunderstorms in his soul. He's sought shelter as a world traveler, an endurance athlete, a story addict, and even gave serious thought to becoming a Roman Catholic priest. After too brief a time in Paris, he moved back to the American West and lives semi-comfortably with three forces of nature: a little, blonde hurricane, an artistic tornado, and a beautiful, beautiful blizzard.”

Appraisal:
I generally don’t read dystopian stories, but the premise of this one grabbed my attention. The characters are all well-developed, quite unique, and interesting. This is going to be an epic coming-of-age saga contrasting two disparate worlds existing side by side. Aaron Michael Ritchey has done an outstanding job setting up his world and has kept it as realistic as fantasy can get while still pushing the limits of reality with the elements he employed.

FYI:
Dandelion Iron is the first book in The Juniper Wars series.

Format/Typo Issues:
I read and reviewed from an advanced readers copy, so can’t really comment on editing.

Print Length: 278 pages
Posted by BooksAndPals at 9:15 AM