Review: Tangled Up in Blue by @AuthorJDBrick 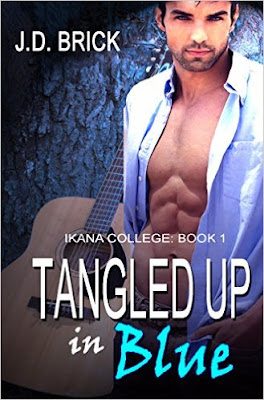 Description:
“Keegan Crenshaw needs a hero. She's a straight-A student from a famous Oklahoma family and the youngest-ever editor of her college newspaper. She's got a lot to prove. But she's got enemies. Someone's out to get her. Someone's got her running scared. And she runs right into the arms of a red-hot boy named Blue.

Deep down, Blue is still the brave soldier who risked his life for others in Afghanistan. He's still a hero, even if he no longer believes it. All he wants now, though, is to make music and bury the secret that could destroy his future. Blue tries hard to be a good guy. But he's wrestling with demons he can barely control. And when Keegan moves into his house and very quickly into his heart, his hard-fought control begins to slip away…”

Author:
“J.D. Brick is a pen name… I am the author of the Ikana College contemporary romance series. I’ve been a journalist, technical writer and intrepid humorist, which is the only kind of humorist worth being.

I’m crazy for sweeping, ugly-cry tales of true love that are full of heat and heartbreak. When I’m not writing or reading about swoon worthy book boyfriends, I’m a wife, mother, corporate refugee, ever hopeful if seldom successful gardener, and slave to great books and good coffee. Or vice versa.”


Appraisal:
Keegan Crenshaw comes from a privileged background but really doesn’t see herself as different from any other college student her age. She’s been through some tough experiences but has fought hard to keep her grades up. Her scholastic efforts have awarded her the coveted position of head editor for the campus newspaper, The Daily, over an equally qualified senior student. Recently though she has become the target of a stalker who is sending threatening text messages, emails, and recently a phone call. Keegan’s hardline determination starts to waiver as the stress of the stalker weighs heavier on her psyche. Desperate to hide, she moves out of the dorm and into an off-campus party house known as The Canadian Embassy. What was she thinking?

Blue Danube, head resident of the Embassy, is an ex-military upper-classman studying music at Ikana College. Blue has a complicated history he keeps hidden deep in his soul and suffers PTSD. The instant sparks between Blue and Keegan come across as pure lust. I had trouble buying into the love at first sight storyline, however I enjoyed having both Keegan’s and Blue’s dual perspectives. It gives the reader a sense of Keegan’s insecurities and naïveté as well as Blue’s inner strengths and struggles. A few of the secondary characters are also well developed and some are still in the process of full disclosure. Personally, I would love to know more of Keegan’s grandmother’s thoughts and feelings.

This turned in to a much more complicated and twisted storyline than I was expecting. There is a helluva cliffhanger at the end, which I guess I overlooked in the blurb. If you are looking for a happily-ever-after story you won’t find it in this book as it stands. Perhaps the sequel will be able to deliver? It’s hard to say at this point.

FYI:
Tangled Up in Blue is Book 1 in Ms. Brick’s Ikana College series. This book also contains adult language and mild adult sexual situations that may be offensive to some readers.

Format/Typo Issues:
I ran across a small number of proofing errors during my reading.

Posted by BooksAndPals at 8:02 AM