Reprise Review: Will You Love Me Tomorrow by @DannyGillan 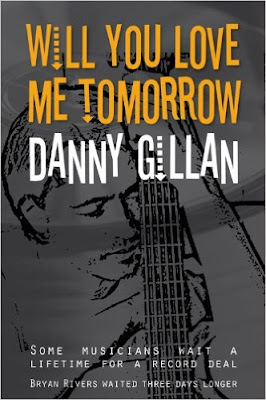 Description:
Claire Rivers returns home to find her husband, Bryan, has committed suicide, no longer able to deal with his depression. A music executive, Jason Clemence, calls and offers Bryan the recording contract he’d always craved, unfortunately the artist is no more. Claire however, at Clemence’s suggestion, agrees to publish Bryan’s music posthumously, to massive success…

Author:
Danny Gillan was raised and still lives in Glasgow, Scotland. His first ambition was to be a musician, but ended up in the pub and hotel trade for a number of years in a wide variety of roles, interspersed with periods in social care.
Danny has written two novels, and a series of short stories which have appeared in several magazines and anthologies.

You can learn more about Danny at his Amazon author page. Also feel free to stalk him on Facebook.

Appraisal:
I’ve previously reviewed another piece of Danny Gillan’s work, A Selection of Meats and Cheeses – a collection of short stories, so I was very pleased to pick up a full-length novel of the author’s.

This is a long book (for me anyway) at 130,000 words however, even the shortest of narratives can feel like they take forever to read if they’re badly written, and vice versa. In this case the story literally tripped off the pages and I found myself hooked – Will You Love Me Tomorrow becomes increasingly compelling as it progresses.

One of the aspects I liked about it was the relatively few characters, meaning the author achieved a significant focus on the impact of Bryan’s depression / suicide. All were strong, well-drawn and added to the story and its progression. One in particular I liked was Clemence’s boss – Phillip Doland. He’s someone most of us would recognize (I do), a manager who’s risen to the top on other people’s hard work. Phillip uses bizarre swear words and is oblivious to everyone around him because all he sees is himself.

Claire herself is also very good. She could have been swept away in the suicide and aftermath, but strengthens throughout and finally turns the tables on the record company. Jason is a fish out of water, one minute confident, the next shaky. His interaction with Phillip is well done. Another valuable character is Bryan’s brother Thomas. He’s dislikable, a stuffed shirt who never valued his brother’s ability.

The story is made all the more touching, because, with the suicide laid out at the beginning, the reader knows the characters can do nothing to prevent Bryan’s fall. But we see the why and the characters learning from this as an experience.

The author’s experience in this field came through very clearly. Gillan doesn’t glorify the depression, rather it is portrayed as an affliction that can have a terrible impact on people – the treatment was compassionate, caring and tinged with humour. In fact, the latter element lifted the story too, it was by no means down and depressing. Ultimately it was uplifting and positive. The conclusion was satisfying.

Well written, touching, funny and reinforced my view that Danny Gillan is a high quality writer.


Posted by BooksAndPals at 7:37 AM