Review: Force of Will by Jack Volante AKA @VolanteJack 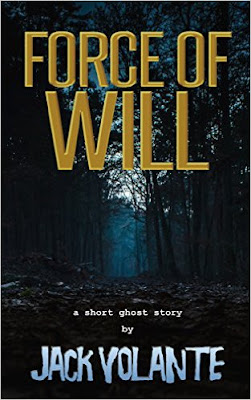 Description:
What if the last emotion you experience, moments before you die, is the only thing that defines you in the afterlife?

This short story tells the first-hand account of one young man and what happens on his fateful last day in the magical land he inhabits. Little does he know that someone has been watching him from afar and has great plans for his future, although not in the way he would want. A spooky tale set in a paranormal, fantasy world and featuring the horrors of necromancy.

Author:
Form Jack Volante’s website: “A newly hatched writer in the self-publishing world. Jack has many stories currently bubbling inside his head, all trying to fight their way onto the page at once.
A lover of movies and a devourer of sci-fi and fantasy novels. Currently converting his fantasy screenplay into a full length novel. Jack has been writing, off and on, since 1997. Lives in Europe working in IT for a software company. Jack is also the proud father of two wonderful young sons.”
To learn more about Mr. Volante check out his blog or follow him on Facebook.

Appraisal:
We are thrown into the middle of a raging war just after a young soldier has been mortally wounded. He is not quite dead yet, however, and as he reminisces his life he hears a voice demanding him to get up and continue fighting. Even though he tries to comply, he is unable to because his legs are missing. This is an interesting perspective to be given as he describes the horrors of the undead army he had been fighting against. As the young soldier succumbs to death and the orders of the necromancer, his spirit, filled with an overpowering rage, rises in ghost form.

I found the story consuming even though I don’t normally read horror. It was the ghost story that drew me in and kept me reading. The twist of the ghost’s all-encompassing rage was unexpected and enjoyable at the end. I have to admit it left a smile on my face.

This short story was a quick read and well told. Future works from Mr. Volante could prove interesting to check out.

Format/Typo Issues:
I found nothing significant to speak of. An extra word, which can be seen in the preview, and a dropped ‘n’ on a word that should have been then, not the.

Posted by BooksAndPals at 9:26 AM