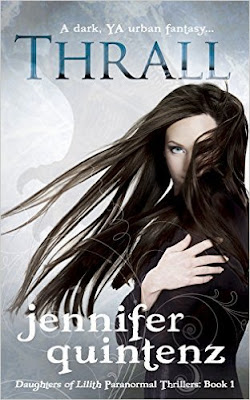 Genre: YA / Coming of Age / Paranormal

Description:
“Braedyn is a normal girl just trying to survive high school with her two devoted friends, Royal and Cassie. Together they're doing a pretty good job of shrugging off the slings and arrows cast their way by the popular crowd when a new boy, Lucas, moves into the house next door. Suddenly Braedyn finds herself falling in love for the first time.

But as her sixteenth birthday approaches, Braedyn discovers humankind is at war with the Lilitu, an ancient race of enticing demons that prey on human souls. Her father is a member of the Guard fighting against the Lilitu - and so are the new neighbors, including her crush, Lucas.

As her world starts to unravel at the seams, Braedyn learns the right answers aren't always clear or easy. And as for ’good‘ and ’evil‘ - it all depends on how we choose to act.
Inspired by the ancient Mesopotamian myths of Lilith and her offspring, Thrall explores first love, strong friendships, and taking on adult responsibilities against the backdrop of powerful supernatural forces and life-and-death stakes.”

Author:
“Jennifer is a film and television writer, author, and graphic novelist. She has written for Twentieth Television, Intrepid Pictures, and Archaia Studios Press. She lives in Los Angeles with her husband and son.”

This is the first book in her The Daughters Of Lilith trilogy.

To learn more about Ms. Quintenz, visit her website.

Appraisal:
Braedyn’s life is turned upside down and sideways in this creative coming of age story. The Guard, a Special Forces group of human soldiers, thinks they have found a way to combat a coming war with the Lilitu, who are trying to break down the wall between the two worlds to take over earth. As Braedyn’s birthday approaches, she learns she is not who she thinks she was all these years growing up and neither is her father. This story examines nature verses nurture in an interesting thought provoking way as we experience life through Braedyn’s eyes.

I found the story compelling and my suspension of disbelief was easy to achieve. Ms. Quintenz did an excellent job conveying the high school tension between certain cliques in and out of school. Her characters were well rounded and the situations they found themselves in were realistic for the most part. This story has the potential for being an intriguing series. I hope the sequels will spend more time with Karayan. She had a disturbing upbringing and I hope that Braedyn can help her work through issues caused by that. There is potential for a mutually beneficial relationship between these two I would love to see explored.

There was a lot of high stakes action as the winter solstice moves closer and the Lilitu converge on the town turning young men into Thralls to build an army to battle the Guard on this side of the Wall. When a new unit of Guards and spotters converge, chaos ensues and Braendyn is put to the test to prove whose side she is really on. Will Braedyn’s humanity be enough to over-power her genetics? Only time will tell in this original, action-packed series.

Format/Typo Issues:
There are a few proofing issues, not enough to significantly impact my reading enjoyment.

Posted by BooksAndPals at 7:53 AM