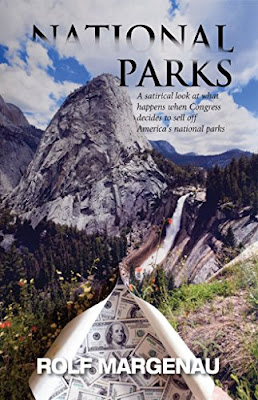 Description:
“In the near future, the San Andreas Fault ruptures, sending Los Angeles beneath the Pacific Ocean, famine grips the Midwest and massive gates keep the Potomac River from flooding the Capitol. Congress, through gridlock, inactivity, and disastrous economic policies, has brought the nation to the brink of bankruptcy. As a way to generate money needed to avoid default, Congress plans to sell the national parks to the highest bidders. Three strong women intend to stop them.”

Author:
“Rolf Margenau has had a varied career. He was a soldier in the Korean War, a correspondent for the Pacific Stars and Stripes, a professional photographer, an attorney specializing in international corporate law, a volunteer executive running a not-for-profit housing the homeless, a business manager, and, lately, an author and Master Gardener.”

For more information visit Mr. Margenau at his website or his Fackbook page.

Appraisal:
National Parks takes place in the US in the near future. The world has changed, in some ways for the better. The people of the future have some great technology, for example. However, failure of the country's leaders to think beyond the short term has led to some long-term problems. The result is a slightly dystopian world. (Let's call it dystopian-lite.) As with most dystopian novels, there is a political point being made. But National Parks isn't a typical dystopian novel in that it takes a satirical approach to telling the story with the humor helping to offset the more serious side. A fun read.

Posted by BooksAndPals at 6:57 AM

Great! It is refreshing to have reviewer who "gets" my book. Thanks, Big Al.