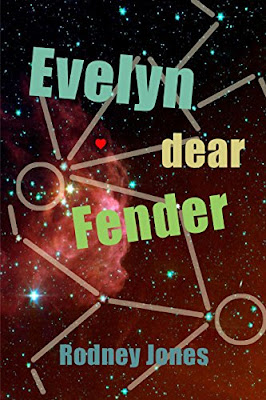 Description:
Evelyn Hatfield sets out to be the first to reach the mythological land of Methania. But before her epic journey can begin, she must first suffer high school jealousies, the apathy of conformity, and a pair of clueless parents--all while learning to sail.

Through chance, and a few innocent manipulations and half-truths, Evelyn finally sets sail for the distant horizon where she and her stowaway monkey, Bobo, do battle with their most fearsome enemy, the weather... and lose. Shipwrecked on a tiny island, 4,000 miles from home, she meets Fender Spigot, an equally shipwrecked explorer from Methania who, having never heard a language other than his own, gibber-jabbers his way into her heart.

Regardless of their communication issues, they manage to help each other escape the island and head home--Evelyn, sailing east, and Fender, west. They soon discover, however, that absence makes the heart grow fonder. But how can they, again, find each other with a monstrous ocean and a thousand misunderstandings between them?

Author:
From Rodney Jones’ Author page on Amazon: While a past resident of Michigan, Ohio, Illinois, Florida, New York, and Vermont, Rodney now resides in Indiana, where he whiles away his days writing, walking, talking, yakking, packing, and wilderness camping with whoever will accompany him.

His list of past occupations reads like his list of past residences, though his life-long ambition was to be an artist, until he discovered a latent affinity for writing… Rodney’s interests include: art, science, whiskey and chocolate, music, gardening, and travel.

Appraisal:
Evelyn Dear Fender is a unique story set in a fantasy world that is similar to our own. The characters are well developed, realistic, and myopic. Except for Evelyn and Fender, who both had the heart of adventurers. They both believed there was more to the world than their own small section of it. There were myths and stories around, which others disregarded as mere folktales of other lands. Evelyn and Fender both set out from opposite sides of the world to prove these other lands actually existed.

The first third of the story we meet Evelyn; we learn about her growing up, get a sense of her adventurous spirit, and her desire to explore. She knows exactly how to manipulate her parents to get what she wants. Evelyn is smart, head strong, courageous, and a little naïve. You can’t help but love her spirit.

When Evelyn’s dream of owning a sailboat becomes a reality, she makes plans to set sail to discover the mythical land of Methania. She smartly packs provisions for her long trip on her boat, which she named Fido because dogs are loyal, never get lost, and always come home. Things all go more or less as planned until there is a huge storm where Fido and Evelyn become shipwrecked on a small uninhabited island. It just so happens on the other side of the world Fender set sail in his sailboat, Pencil, to find the mythical land known to him as Barnyard and gets hit by the same storm to become shipwrecked on the same island.

This is a wonderfully adventurous but challenging tale, which is told from both Evelyn’s and Fender’s points of view. This helped, as there is an interesting language barrier between the two. They mainly communicated through pictographs because each language sounded like gibberish to the other. Mostly because both languages used the same words, but the words had different meanings. I kept trying to find rhyme or reason to the words but never managed it. I found it easier to take it all in at face value and move on. There are a few twists in the story that make it heartwarming, then more twists that could have all been disastrous if it wasn’t for a few compassionate people.

My only complaint, besides the challenging language thing, was that I felt like Mr. Jones missed the boat concerning Evelyn’s illness towards the end of the story. I was sure he was headed in a certain direction, which included more than the logistical difficulties of the journey. So, I was a bit let down and the story lost a star. I can’t say more without adding spoilers. The story comes to a satisfying, heart-warming ending that could have been even more joyous if it had taken a fantastical leap.

Format/Typo Issues:
I found a small number of proofing errors.

Posted by BooksAndPals at 9:53 AM