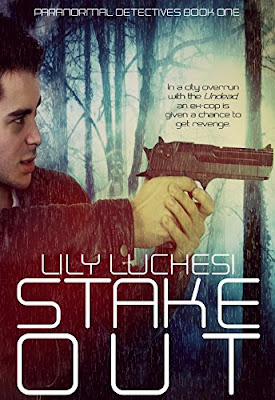 Description:
“Danny Mancini is on a case, following a murder suspect. When he catches him, he finds out that the perp isn't even human: he's a 200 year old rogue vampire!
The department doesn't believe him, and puts him on early retirement, despite his many years of service to the Chicago Police Department, which sends him into a downward spiral.

Two years later, Danny gets an invitation from the beautiful, young and very attractive Detective Angelica Cross to join a secret branch of the FBI to help her track down Vincent, the wayward vamp.

But renegade werewolves, meddling immortal witches and Danny's strange visions of a life lived a century ago with Angelica make things more difficult than it should be.”

Author:
“Lily Luchesi is a young author/poet born in Chicago, Illinois, now residing in Los Angeles, California…She is also a hopeless romantic and avid music-love who will always associate vampires with love, blood, and rock and roll…She finished her first manuscript at the age of fourteen, and now, at twenty-one, has two contributing credits in anthologies and her debut novel, Stake-Out (Paranormal Detectives Series Book One), was published by Vamptasy Publishing on May 19th, 2015. Book two, Miranda's Rights, was released on January 8th, 2016.”

Appraisal:
Stake-Out has an interesting storyline with well-developed characters. Past information was doled out, when needed, at a nice pace. Detective Danny Mancini had been ostracized from the Chicago Police Department for two years after his report involving a rogue vampire. Why it took Angelica Cross two years to approach Danny is left more or less unclear, especially after learning their past history.

Angelica is an agent in a special FBI unit that investigates, monitors, and controls paranormal creatures who don’t live within the law, known as the PID (Paranormal Investigative Division). Danny reluctantly agrees to join forces with the young beautiful agent to bring justice for the victims of this one rogue vampire, known as Vincent.

I think this story has promise, however I ran into a few problems that a good editor and a few beta readers should have or could have cleared up. First, but not foremost, were all of the exclamation points during the narrative. At first they were laughable but they quickly became an irritation. Exclamation points are acceptable in dialogue, not so much in the narrative portions of the story. Second, there were a few wrong words or missing words. Third, and foremost, was the small nest of vampires in Lombard. Despite being told the nest used to include six vampires Danny and Angelica learn that there was now a new leader, which took the number down to five. However, our heroes end up fighting six vampires, who Ms. Lechesi was kind enough to give names to as they were destroyed. Honestly, five is not that hard of a number to keep track of and I had a big issue with this. This was a continuity problem that should have been picked up during the editing process.

In spite of the editing issues I came across, I think this was a good story that deserves some more attention. The main plot came to a successful close, more or less. There was a big info dump at the end as Danny was overtaken by precognitive insight, which explained why he felt so strongly drawn to Angelica. Their relationship was left in limbo at the end, which offered a continuation to the story. I have decided to call endings like this a soft cliffhanger. Fortunately there is a second book ready for those who want to jump right back in for more.

FYI:
Stake-Out is book one of the Paranormal Detectives Series. For those who are concerned, there are a few F-bombs and sexual situations are behind closed doors.

Format/Typo Issues:
These are mentioned above in the body of my review and did result in the loss of a star.

Posted by BooksAndPals at 8:09 AM