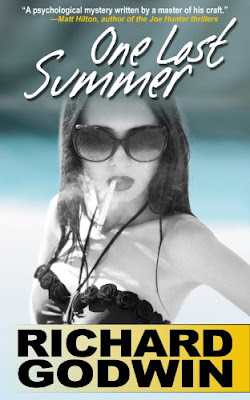 Description:
It is high summer and Rex Allen moves into his new house, The Telescope. Barely has he begun to unpack when his attractive neighbor, Evangeline Glass, invites him to one of her regular parties.

Author:
Richard Godwin is a widely published author, with a focus on horror and crime, and a playwright. He has written two full length novels – Apostle Rising and Mr. Glamour and has contributed multiple short stories to anthologies.

Appraisal:
Mr. Godwin reveals the plot underlying One Lost Summer like a card sharp. He steadily doles out the pack one by one, hiding the trumps with clever sleight of hand, only revealing the complete set right at the conclusion. This is a clever, intelligent psychological thriller.

Added for Reprise Review: One Lost Summer was a nominee in the Thriller category for B&P 2014 Readers' Choice Awards. Original review ran August 5, 2013

Posted by BooksAndPals at 9:40 AM