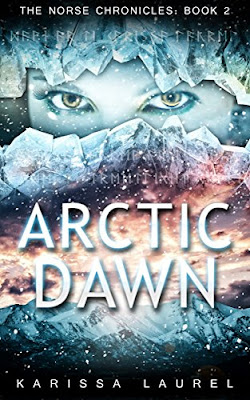 Description:
“Alone and exhausted after her month-long sojourn as a shooting star, Solina Mundy flees to southern California to lie low, recuperate, and plot a survival strategy. The one person she trusts to watch her back is her best friend, Skyla Ramirez. But Skyla has been missing for weeks.

Author:
“Karissa lives in North Carolina with her kid, her husband, the occasional in-law, and a very hairy husky. Some of her favorite things are coffee, chocolate, and super heroes. She can quote Princess Bride verbatim. She loves to read and has a sweet tooth for fantasy, sci-fi, and anything in between. Sometimes her husband convinces her to put down the books and take the motorcycles out for a spin. When it snows, you'll find her on the slopes.

Appraisal:
Ms. Laurel has stepped up her game in Arctic Dawn. The characters are more intense, the action is nonstop and the entire book is more heavily steeped in Norse Mythology. Solina’s powers have matured and she is fully focused on her mission at all times, even if she is not totally aware of what is going on around her. I love the way she challenges Thorin at every turn. And even though this vexes Thorin, you can tell he admires her spunk and tenacity as she is always honest with her feelings about the situations at hand. However, she continues to conceal her emotions and desires from Thorin. Her walls are cracking though, as are Thorin’s. I practically melted during a few touching scenes.

FYI:
Arctic Dawn is book two in The Norse Chronicles following Midnight Burning. I would recommend reading this series in order.

Posted by BooksAndPals at 6:11 AM