The Second-Best Ranger in Texas by Kathleen Rice Adams @DisorderlyWords 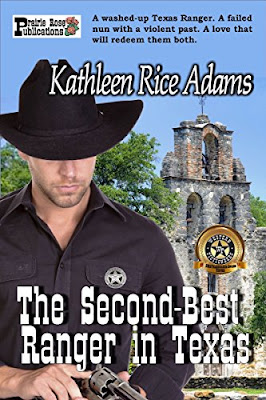 Description:
“His partner’s grisly death destroyed Texas Ranger Quinn Barclay. Cashiered for drunkenness and refusal to follow orders, he sets out to fulfill his partner’s dying request, armed only with a saloon girl’s name.

Author:
Kathleen Rice Adams: “Descended from a long line of Texas ranchers, preachers, and teachers on one side and Kentucky horse thieves and moonshiners on the other, award-winning author Kathleen Rice Adams had no choice but to become an outlaw. Maybe that's why in her stories, even the good guys wear black hats.

Appraisal:
I enjoy a little cowboy action occasionally. The Second-Best Ranger in Texas filled the bill nicely. The characters are well developed and realistic. Quinn is trying to deal with his best friend’s death through whisky. After losing his position as a Texas Ranger, Quinn is now on a mission to carry out the promise to his dying friend. The message is cryptic; all he has is the first name of a woman and the name of the town to find her.

FYI:
The Second-Best Ranger in Texas was the winner of the 2015 Western Fictioneers Peacemaker best short fiction award.

Thank you so much for the lovely review, ?wazithinkin. (Yes, I realize it's not politic to engage a reviewer about his or her review, but I can be rebellious that way. ;-) I do think reviewers don't receive nearly enough gratitude for the time and energy they expend. Please know you're appreciated.)

Thank you for dropping in and commenting, Ms. Adams. It is appreciated, and you are welcome.

I have to credit my grand kids for my moniker. I earned it the hard way. :)