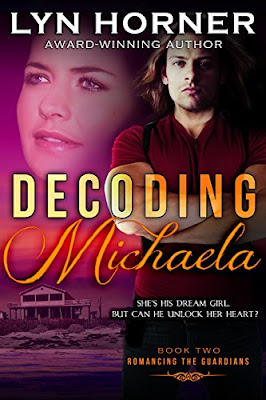 Description:
“Michaela Peterson can read minds but can she tell good from evil? A Guardian of Danu sworn to protect one of seven sacred scrolls, her identity is known only to the High Guardian. Or so she thinks until a stranger brings word that her revered leader has been murdered by vicious ‘Hellhounds’ who want the scrolls. She’s attracted to the handsome messenger, but is he who he claims to be? Or does he mean to gain her trust and steal the scroll she guards?

Dev Medina often dreams of a woman he calls his golden goddess. He believes she is real and meant for him. Expecting to deliver a warning to Dr. ‘Michael’ Peterson from the new High Guardian, he is stunned to find the doctor is his dream girl. Fearing the Hellhounds may be coming after her, he wants to whisk her to safety, but she stubbornly resists leaving her Galveston, Texas, home. Can he convince her to trust him before tragedy strikes?”

Appraisal:
It has been over a year since I read Rescuing Lara but it took me no time at all to get back into the story. Dev Medina has offered his assistance in locating Dr. Peterson, since it was his knowledge that helped decode the book Lara had secured from her uncle. Dev has a personal mission, aside from alerting Dr. Peterson to the danger that has developed, as he heads to the Galveston coast. Dev has prophetic dreams, and he was sure he would find the girl from those dreams in the area.

Ms. Horner was clever in the way she plotted this story. Dev is a strong, overpowering character who doesn’t do subtle. This doesn’t work in his favor when he is pitted against an intelligent, independent woman who refuses to be pushed around. Dev has to learn to temper his ways to convince Michaela he is there to help her and is looking out for her best interests. However, I don’t think it served the story well that Michaela withholds using her powers of insight during most of the book. As a result, I didn’t feel like Decoding Michaela carried the same level of tension as Rescuing Lara had, until the climax.

I did find Michaela’s story heart-rending and I melted as she developed a relationship with Dev. The ending was satisfying as Dev and Michaela make their way west into Navajo country to meet up with Lara and Conn. There, future plans are made to locate the other guardians. This is going to be a fascinating series and I am looking forward to meeting the other guardians.

FYI:
Decoding Michaela is book two in Lyn Horner’s Romancing the Guardians series, following Rescuing Lara. I would recommend reading this series in order. This book does contain sexual situations that may offend some.

Posted by BooksAndPals at 12:31 PM