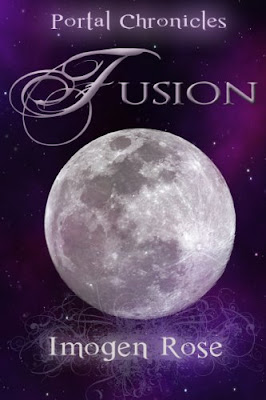 Description:
The final book of the Portal Chronicles series, which brings to conclusion the time-and-dimension-hopping adventures of the two Arizonas, Arizona Stevens and her alter ego in another dimension, Arizona Darley.

Author:
Globetrotter Imogen Rose is Swedish by birth, went to college in London (where she received a PhD in immunology), and is now a Jersey girl. After her eight-year-old daughter insisted she write down her stories, Rose wrote the first of her Portal Chronicles series and decided to let it out into the world. The response was so positive that she’s continued with the series, and started two other series.

Appraisal:
The covers of past Portal Chronicles books each depicted a new moon phase. Imogen Rose set herself up to have to wind up the series with this book, with a full moon on the cover. I’ve read several times in several different venues that Rose is a “pantser” rather than an outliner and didn’t know where the story was going; I was interested in seeing how she’d wrap up the overall story line. I saw two logical conclusions, which I won’t detail to avoid spoilers, but will say that one of my ideas left room for some of the characters from this series to find their way into Rose’s Bonfire Chronicles or Bonfire Academy series (a very real possibility since the world’s occupied by all of her books have some overlap and we’ve seen some characters appear in both). This still seems possible, while also bringing Arizona’s tale to a logical end, not unlike what I’d pictured, but ultimately a bit different and even better than what I was thinking. Actually, it was the perfect ending. One that should leave most Portal Chronicles fans satisfied.

Reaching the end of a favorite series, which this has become, is bittersweet. The cliché says that all good things must come to an end, and I suppose that’s right. A book series that goes on too long often falls into the trap of too much repetitiveness and formula, and I appreciate that the Portal Chronicles are concluding before that had a chance to happen. I’ve enjoyed watching Rose grow as a storyteller and author, and look forward to continuing to do so as her other series progress.

FYI:
I would recommend reading the entire series. Reading the books piecemeal or out of order would leave a reader confused and lacking necessary back story.
A small amount of adult language.

Format/Typo Issues:
My review is based on a beta version of this book, so I’m unable to judge this area.

Posted by BooksAndPals at 10:41 AM