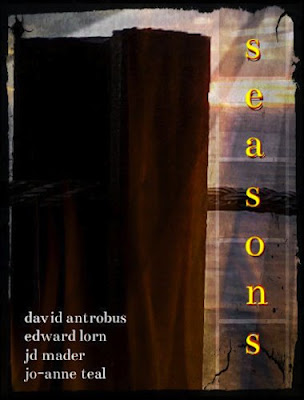 Description:
“This collection of four inter-woven stories explores the quest for redemption in a world made chaotic by emotional disorder. Broken characters brace themselves against their elemental constructs - only to find that nothing is promised and that nothing comes without a price.

Four seasons. Four stories written by four critically-acclaimed authors. Are the seasons reminders of our growth or a glimpse at our slow decay?

The answer is not as simple as it seems.”

Proceeds from the sale of Seasons will be donated to the National Suicide Prevention Lifeline.

Author:
Among the four contributors to this collection is a winner in our inaugural Readers’ Choice Awards (David Antrobus for his 9/11 memoir, Dissolute Kinship) and two nominees, author Edward Lorn, whose horrific thriller Hope for the Wicked was on our short list in the Thriller category, and JD Mader, who contributed to Music Speaks, a nominee in the Short Story Collection/Anthology. (Antrobus also contributed to that collection, giving him the distinction of being the only dual nominee.) Joining them is Jo-Anne Teal. Although this is the first book linked to Teal’s author page on Amazon, you can sample lots of writing on her blog, Going for Coffee.

Each of the other authors have websites or blogs, too. Find more about Antrobus at The Migrant Type, Mader at Unemployed Imagination, or find out what Lorn’s been thinking about at Ruminating On.

Appraisal:
Anyone who has ever been touched by suicide knows that the event leaves you full of questions with very few answers. These four interwoven stories (one for each of the seasons) explore life, death, and the desire (or lack thereof) to continue the former. As the final line of the book’s description says, “the answer is not as simple as it seems,” and really, there is no answer. But possibly by considering these subjects we can get closer to an understanding.

I’d previously read Antrobus, Lorn, and Mader, and found their writing in this collection up to their normal high quality. Although this was my first exposure to Teal’s writing, she measured up to the standard set by her co-contributors.

FYI:
Spelling conventions used are consistent with the home of the respective authors, Canada for Antrobus and Teal, the US for Lorn and Mader.

Posted by BooksAndPals at 9:16 AM