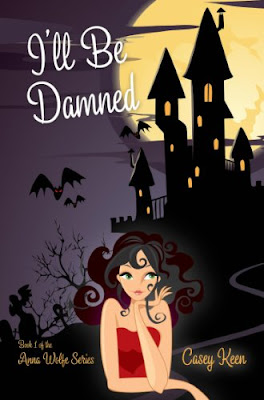 Description:
“As the owner of the coffee shop Deja Brew in Savannah, Georgia, Anna thought her life was ordinary. That is until her sister is kidnapped by a demon, prompting two handsome men to march into her life unexpectedly. Valen, the sinfully gorgeous, overprotective werewolf who is Anna’s sworn guardian and Roman, the most handsome and powerful Warlock in the entire Netherworld.

Suddenly, her world is stripped of everything she knows and replaced with frightening news about who she really is - a powerful Grand Witch. Now, it’s up to her to draw out her dormant magic, rescue her sister and stop an impending heavenly war threatening to eradicate the human race all while staying alive.”

Author:
From Casey Keen’s Smashwords author page: “Self-published and determined is how I started my writing career. With an overactive imagination and a healthy passion for anything paranormal, I decided to write about it. Why not? I allowed myself to indulge in the boundless depths of my imagination and my Anna Wolfe Series is just the tip of the supernatural iceberg!

Born and raised on the outskirts of Philadelphia, I grew up loving cheesesteaks and soft pretzels! I attended Drexel University where I obtained my Bachelor's Degree in Psychology. I still reside in suburbia, working on the Anna Wolfe Series."

I’ll Be Damned is Casey Keen’s debut novel. To learn more check out her website and Facebook page.

Appraisal:
Anna Wolfe is a twenty-nine-year-old, who has led a sheltered life and has no idea who she really is. Having suffered from nightmares her whole life, which she never bothered to investigate, seek guidance, or advice for, Anna has become a master at pushing things aside to deal with them later. Avoidance seems to be her motto, as it is repeated endlessly through the story. “I need to talk you in person, not over the phone… I’ll give you the details later.” “I can’t wait to leave these annoying worries at the door.” “I really don’t want to even think about this right now.” “…concluding I’d rather wing it than make it tangible.” “I tuck them away in the nether regions of my brain promising myself I’ll address them after all of this is over.” Anna comes across as whiny and weak, not a good start for a heroine.

I’ll Be Damned has a good story somewhere in amongst all the unnecessary words and repetitions. Ms. Keen loves her words and overabundant descriptions about everything. However there seems to be only one kind of tree in Savannah, Georgia, but she illustrates it beautifully over and over again. In the beginning Anna is a pretty bland character and seems insecure despite her professional accomplishments. She does, however, make several half-witted decisions throughout the story, which only lead her into trouble. Her best girlfriend is a huge party girl who has a good heart. Anna’s other friend is a flaming gay black man from Louisiana who owns a local bar down the street from her coffee shop, Deja’ Brew. Martello is by far my favorite character, but I found his speech pattern a bit disparaging, which I can only write off as the author’s prerogative. His character has a lot of depth and he is Anna’s most supportive friend. Valen makes a slow appearance, which portrays him as more of a creeper than a guardian. But, after this rough start, Valen is the only other character with any meaningful depth. The sexual tension between Anna and Valen is scrumptious and I found myself wishing this wasn’t a young adult book.

The plot is VERY slow to develop, even after Anna starts to learn the truth, because all she wants is a normal life. Avoidance will make it all go away, right? With her powers starting to awaken, Anna has no choice but to learn to control them and face her new reality, which is filled with strange creatures from the Netherworld, werewolves, demons, and warlocks. The political aspect of the Netherworld is unique and only lightly touched on in this book. There is a good story in here somewhere. The ending has a dramatic cliffhanger, which wasn’t really a surprise. For those interested in continuing this series there are two other books published so far.

FYI:
I’ll Be Damned is the first book in The Anna Wolfe Series.

Format/Typo Issues:
Small number of proofing errors that range from missing, extra, and wrong words. I think a good editor could help Ms. Keen focus on the core of this story.

Posted by BooksAndPals at 7:23 AM