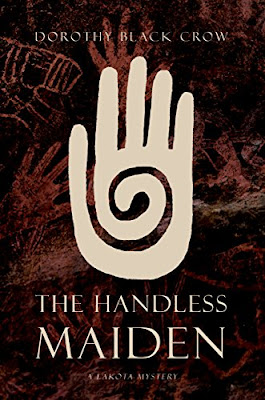 Description:
James M Frey – Dorothy Black Crow’s writing mentor – describes the book thus: “The Handless Maiden is not like any mystery you have ever read in your life. It takes place in 1977 on the Lakota Pine Ridge Reservation in the Badlands of South Dakota. Here, the memory of the massacre at Wounded Knee in December, 1890 still burns hot in the tribal memory. Here the ghosts of long dead ancestors are still seen walking in the moonlight. Here there are sweat lodge ceremonies that produce astounding visions. And here, 300 FBI agents have been sent to put down a rebellion by a few dozen young Lakota Warriors and they aren’t about to waste their time reading you your rights. Now Tate Turning Hawk, a young woman recently married to a young medicine man and new to the reservation, is led by a ghost she does not believe in to the body of her friend Joanna Joe, brutally murdered and her hands chopped off. The local police and the FBI could [sic] care less. Joanna Joe was a trouble maker. It’s up to Tate and her medicine man husband, Alex, to bring justice. They go after the killers the Lakota way, the spiritual way…”

Author:
Dorothy Black Crow lived with the Lakota in South Dakota in the Seventies and Eighties and now lives in the Pacific Northwest, closely involved with Native Americans there. She is “An award-winning poet, fiction writer and former professor of literature at Oglala Lakota College and the University of Michigan, [she] explores the reality of life on the Pine Ridge Reservation, from her own experience as a woman married to a Lakota Sundance leader, as well as from an outsider's perspective. She writes with a blend of understanding, experience and knowledge.” (Goodreads). On her own website she says, “I write to honor the elders who have gone on so that the young ones will know about the good and bad times. I write about Native American social justice, honor and respect.”
To learn more about Ms. Black Crow you are welcome to visit her website.
Appraisal:
I was drawn to this book as soon as I saw the title, because of the link to the German fairy story by those aptly named ‘Brothers Grimm’ and the collection by the British poet Vicki Feaver with the same title. When I looked at the ‘blurb’ and discovered it was, in fact, a crime story set on a Reservation in South Dakota I was even more intrigued, as the study of Native American history was part of my British university course many years ago (some seven years after Bury My Heart at Wounded Knee was first published) and I have never lost my fascination for that way of life. The use of fairy tales, myths and legends can enrich the fiction we write (and read) now. Where would we be without the stories which anchor us to our own past? Cut loose as wandering ghosts, perhaps …

This is a very interesting book, full of information. If you are into Native American culture and/or world belief systems you will enjoy it. It is set in 1977, when relations between Native Americans on the ‘Res’ and the various agencies tasked with looking after them are very bad indeed, especially so close to Wounded Knee (see the background in the paragraph by James M Frey above). There is constant tension and often violence. The Native Americans are offered no respect, and give none. Their rights are ignored, as are many of their needs. However, those for whom life remains ‘Traditional’ – living in log cabins and tipis without running water or indoor plumbing – fare better than those who embrace the White World’s easy life where the numbing effect of alcohol is a constant temptation. I found it poignant how often characters referred to the need for a place of safety, whether spiritual or in some remote hideaway on the Res. And even more poignant how often such places prove not to be safe at all.

The story hits the ground running. There is a violent death very early on (not a spoiler there – the ‘handless’ part of the title is a bit of a clue) and newlyweds Alex and Tate Turning Hawk attempt to investigate it. Tate has a foot in both the White World and the Red having been fostered by a white family. She and her medicine man husband Alex are forced apart by circumstances; each continues to try and solve the mystery so as to allow the dead woman’s soul to find peace. They think they know not to trust anyone, but sometimes one must take help where it is offered.

It doesn’t help Tate’s investigations that a woman’s life on the Res in the Seventies was circumscribed by concepts of ‘Honor’ and ‘Reputation’ to the point where she can barely speak with a man not her husband without giving rise to rumors, amplified by the ‘Moccasin Telegraph’, which blow through the Res, gathering force as they go. If you are a woman reading this book, it may make you quite frustrated. Bear in mind that it is set in 1977, that the author has been a Native American wife, and that her Tate character kicks against the restrictions that are put in her path from beginning to end, sometimes not wisely but always with enthusiasm. And Tate can hotwire a car: respect!
The point of view is alternately from Tate’s and Alex’s points of view. Through Tate, Black Crow is able to filter cultural and social mores which are occasionally quite different to those of the White World, thus helping non-Native American readers absorb and understand what is going on and why. Through Alex she can show the value of the code of conduct which Traditional Native Americans hold so important, and the rituals which support that – and the importance to them of the natural world, as here:

“No sign of the sun or moon or stars or sky overhead or grass underfoot, not even darkness, only a filtered grayness, hard and square and dead. He couldn’t breathe.”

This is not to say that the plot slows down for rituals, or explanations of the Native American way of life – far from it. A brisk pace is maintained throughout. And when Tate and Alex are separated, the regularly alternating PoV helps the reader remember what is happening in the other thread as we gallop along.
There are places where, even so, not quite enough attention is paid to helping the tyro reader with this way of life, which is quite different from the lives most of us lead. However, go with the flow and you will find that puzzling bits come clear as the book unfolds.

Thus I recommend this book to you if you are a fan of crime fiction – particularly with unusual settings – and/or are interested in the life of Native Americans on the ‘Res’, especially in the Seventies.

Format/Typo Issues: There are minor editing problems throughout, but they are only a minor irritation. Their presence has, however, cost the book a *.

Posted by BooksAndPals at 8:56 AM