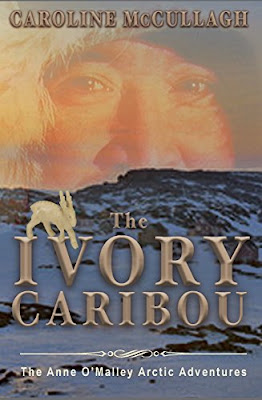 Description:
Anne O’Malley’s genealogical search for the story of her late husband’s father that takes her to the far North of Canada to find new relatives among the Inuit culture, to Europe behind the lines in World War I, and back to the small Inuit village where she finds romance.

Author:
“Caroline McCullagh, award-winning author of The Ivory Caribou, coauthor of American Trivia & American Trivia Quiz Book with Richard Lederer, earned a master’s degree in anthropology from the University of California, San Diego…For the past three years, Caroline has written a weekly column for the San Diego Union-Tribune with Richard Lederer. As a professional editor, she teaches creative writing two days a week.

The Ivory Caribou, then titled Fire and Ice, was a past Winner at the San Diego Book Awards as Best Unpublished Novel.”

Appraisal:
Anne O’Malley’s husband passed away over a year ago and she was having trouble moving past her grief. At her friend’s urging Anne decided to try to complete her late husband’s genealogical research project. There were several missing years in Robby’s biological father’s life. Brendan O’Malley seemed to have disappeared. Anne hoped she could use this venture to finally come to terms with Robby’s death and hopefully put him to rest in her mind.

Piecing together the missing years from Brendan’s life ended up taking Anne on adventures she could never imagine. As she struggled to come to terms with her own life, she was also introduced to a history that can’t be learned from a textbook. With the help of the Chief Research Librarian at Ottawa’s library and a professor of anthropology at Carleton University, Anne was able to piece together Brendan O’Malley’s past and learn more about herself than she ever thought possible.

The plot of The Ivory Caribou is slow and meticulous as new discoveries come to light. The insight into Inuit customs and way of live is fascinating. I found Anne’s insecurities a little over done at times. I also felt like Jack, the professor of anthropology, took unfair advantage of Anne’s insecurities by not being totally honest with her. I have to confess, Women’s Fiction is not one of my favorite genres and I found the diary entries tedious. While there are a few that need to be there, I enjoyed Jack’s summaries of the translations the best.

This is an interesting and educational journey. Ms. McCullagh is able to provide insight into what it could have been like living through World War I in Europe as a soldier and a civilian. Learning about the Inuit culture though is perhaps my favorite part of the book. I would recommend this book to those who have interests in any of these areas.

FYI:
The Ivory Caribou is book one in the Anne O'Malley Arctic Adventures series.

Posted by BooksAndPals at 5:22 AM