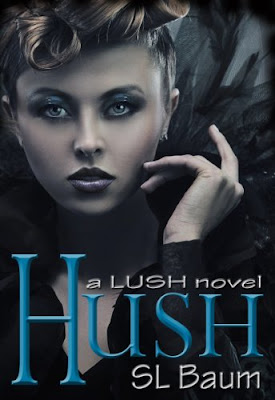 Description:
Hush is the continuation of the serial which began with Lush. In this installment Bluebell has a kind of coming out as the “Lush Ambassador.” She then does a tour of each of the four regions of Concord, the fictional dystopian world where the story takes place. As Bluebell visits each Concord region she learns more about the world she’s living in as well as more about things she’s not meant to find out, including her past.

Author:
A former high school math teacher, S.L. Baum now works as a substitute elementary school teacher, chauffeur for her kids, and novelist. She lives with her family in the Southwestern United States. Her The Immortal Ones series has four books, thus far. Her book Lush began a dystopian serial for young adults with Hush as the continuation.

Appraisal:
In my review of Lush, the first installment in this dystopian serial, I discussed how its world was unlike a typical dystopia. The primary difference is that the standard of living is high, lacking the squalor and poverty of a normal dystopia. But like most dystopias, life is far from ideal. In Concord, life appears good, with a healthcare system that provides a long, good life. However, with the government also making many life decisions for the people, maybe it isn’t so good after all.

FYI: Hush is book 2 in the A Lush novel series.

Format/Typo Issues:
Review is based on a beta copy which means I’m unable to grade the final product in this area.