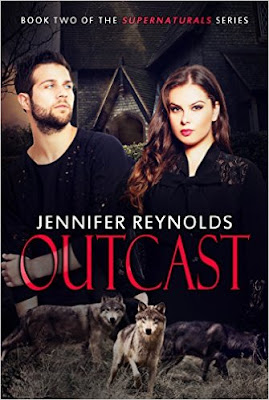 Description:
“Leigh Alexander has lived every day of her life feeling like an outcast amongst her family and the small-minded people of Pine Hollow, a secretive community to which her parents belong. When Danielle, Leigh’s younger sister, asks Leigh to come home for her wedding, Leigh’s torn between wanting to be there for her sister and saving herself from people who’ve despised her all of her life.

Knowing she’ll regret her decision, Leigh gives into her sister and goes home for what she hopes is the last time. Leigh was prepared for people to ignore her, for them to shun her, for them to point out all the ways she didn’t belong all because she wasn’t a size perfect, but what she hadn’t been prepared for was falling for Ryan Hart, a man who she will soon learn knows all of the secrets her family and the town of Pine Hollow refuse to tell her.

Revealing the truth about Pine Hollow and the rest of the supernatural world might be forbidden, but to save Leigh’s life, Ryan will tell her everything about who she is, or more importantly who she isn’t, even if it will forever change her life and the lives of every person in Pine Hollow.”

Author:
“Jennifer Lynn Powell Reynolds is a native of North Alabama. She is newly married. She and her husband tied the knot on Friday, September 13, 2013. Jennifer has a Master of Fine Arts degree from National University and a Bachelor of Arts degree from the University of North Alabama. Writing has always been a large part of her life. In high school, her local newspaper published a large number of her poems, and she won numerous poetry and short stories awards. Since high school, she has worked on a number of different projects, but her focus has mainly been on acquiring her degrees. She finished the first draft of her first novel, a post-apocalyptic piece titled Alone, around the time she graduated with her B.A. Since then, she has written numerous other novels, short stories, and poems. Aside from spending her days immersed in the fictional worlds she creates, she works part time at Stained Glass Artistry.”

Appraisal:
Even though Outcast is the second book in this series, it is a stand-alone novel set in the same fantasy world as book one, Shifter. Leigh Alexander has always felt like an outcast except with her younger sister Danielle, who has always accepted and loved her unconditionally. Leigh always thought it was her weight that had set her apart but despite that, she learned to be comfortable with her size. After attending college, she relocated to Washington State and made a life for herself far away from Pine Hollow, Tennessee. She supported herself editing books, working in a book store, and ghost writing a woman’s life story. Things were going well for Leigh until after her sister’s wedding where she became reacquainted with Ryan Hart, the groom’s best friend.

Ever since leaving Pine Hollow, Leigh seemed to have a lot of bad luck in all aspects of her life. When Ryan relocates to Washington to be close to Leigh, he also encounters a lot of what seems to be bad luck. Trying to solve the mystery of what is going on sends Ryan and Leigh back to Pine Hollow. There are a lot of twists in this story as secrets are revealed and plots are uncovered. Directions change course to involve the whole town of Pine Hollow, unveiling a corruption that must be stopped.

The family and social dynamics in Outcast were believable. But Ms. Reynolds has changed the rules in her unique fantasy world. I also enjoyed the differing points-of-view we were given, which helped define Ryan’s relationship with his parents, Leigh’s parents, as well his relationship with his best friend Dave. I found him more interesting and complicated than Leigh. (Okay, I just made myself laugh because I enjoyed the hunky male wolf more than the human female. Now, I have lost my train of thought… I blame Ryan!)

I think with a little more control over repetition and better proof-reading this could have been a five-star book. Outcast is an enjoyable original story with a few issues, but overall entertaining.

FYI:
Outcast is book two in Jennifer Reynolds Supernaturals series. It is not necessary to read book 1, Shifter, to enjoy this story. This book also contains adult sexual situations, as well as a few F-bombs.

Format/Typo Issues:
I came across a small number of editing issues, which included extra, missing, or wrong words. There were also a couple of strangely worded sentences.

Posted by BooksAndPals at 6:45 AM