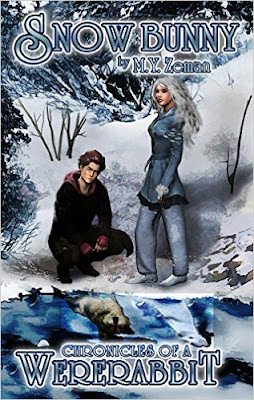 Description:
“My name is Snow and I am a wererabbit. I was born a bunny and thought my fate was to live and die in a lab until a vampire saved me. Now I am fourteen and I've just rescued a teenage werewolf named Josh from scientists who have been experimenting with a terrible serum which takes away the ability to shift.
We need to find the people who took him; discover who they are working for and what they are planning so we can stop them.

The road ahead is scary, full of twists and a new love. But no one ever said becoming a hero was easy...”

Author:
“M.Y. Zeman has a Master's Degree from Stonybrook University and a BA in Mathematics. She followed in her mother's footsteps and became a teacher of computers and math. She has worked as a professional web/graphic designer.
She has been writing since she was old enough to read and has written short stories, articles and poetry. Her first book, Running into the Black is a courtroom drama.

A lifelong fan of science fiction and fantasy… She currently lives in New York with her dog and three dwarf bunnies. She is working on the third book, Snow Island.”

Appraisal:
Snow Bunny starts up where Snowball left off; there is minimal time devoted to the background from the first book. This wasn’t a problem as the necessary background was covered; however, I would recommend reading Snowball first. Snow is now fourteen and is quite smitten with Josh, the young werewolf she rescued from a laboratory in book one. In this story, we learn more about Josh and werewolf society in this fantasy world. The reader is also treated to more insight into the relationships with John, Snow’s father, and Edwin, his partner. Family dynamics figure heavily in this series.

The mission in this story is to stop the people behind the laboratory testing and experiments from where Josh was rescued. In the midst of searching for clues, the family has to find a safer place to live. John is still consumed by his research and is having fun with his new inventions. Edwin decides to move in, putting his globe-trotting aside for a while to offer support and stability. There are several twists as new elements are introduced into the plot. At times I got a little lost because several time-warps are factored into the story to fill in new background information. I probably shouldn’t have though, as the chapters are clearly marked.

I think middle-grade students would find Snow Bunny engaging because of the imaginative creatures introduced, the cool gadgets John invents, and the uniqueness of the adventure. I wish the editing was a little more thorough, but middle school readers may not even notice most of the errors I caught. I think they would be too involved in the story, which is captivating.

FYI:
Snow Bunny is Book two in the Chronicles of a Wererabbit series. I would recommend reading the first book in the series, Snowball. The family dynamics of having two dads is handled well.

Format/Typo Issues:
I found a small number of proofing errors, a few awkward sentences, and a bit of repetition.

Posted by BooksAndPals at 8:36 AM