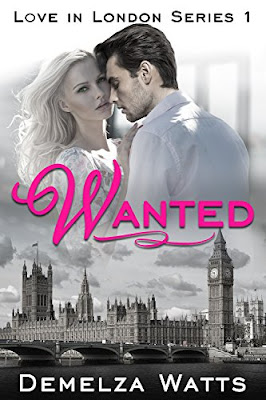 Description:
“Running from heartbreak, Elizabeth Morgan has left her small town for the big city lights of London. Although she is open to love, she wants to be sure the man she finally sleeps with is the One. She envisions a perfect union-just like her parents.

Then she goes to work for Theo Steele and her life is turned upon its head. Theo is an arrogant American, bursting to take the London market by storm. He plays by the rules… his rules. Until he finds himself toe to toe with a beautiful blonde. All he knows is that he wants her… now.”

Author:
From Demelza Watts Author’s page on Amazon: “I live just outside London, UK. For as long as I can remember, I've always been a bookworm - sometimes hiding from my siblings in my younger days, just so that I could devour another chapter in peace!

I love reading romance books - there's nothing like your characters ultimately getting their happily-ever-after, once they have weathered through their trials and tribulations. Life can be tough and it's great to escape into a land of make-believe, every now and then.”

Appraisal:
Wanted, a novella, was told through Elizabeth Morgan’s eyes. At twenty-one, after a failed relationship, she had decided to move out of her parents’ home and in with her girlfriends in London to start fresh. Beth had lined up a temp job with Steele Global Investments in the marketing department. Her first day at her new place of employment she literally bumped into the most handsome man she had ever set eyes on in her life. Embarrassed, she apologized, picked up everything she dropped and hurried to the reception desk. As she was getting settled into her job in the marketing department she learned that the CEO for Steele Global was in need of a secretary while he was temporarily in London from the United States. Of course this happens to be the gorgeous man she ran into that morning.

Upon meeting Theo Steele, Beth was overwhelmed with his business persona, at first. She noted his arrogant, ruthless, and pompous attitude. He was a man who got to his position expecting people to do the best job they could manage. He also knew what he wanted, or at least he thought he did. Having been burned in the past, he had no intention allowing that to happen ever again. He would not allow himself to become involved in any long-term relationship. Theo Steele was a rich American living in the fast lane. I was conflicted with his character. Even though he said the words ‘You. Are. Mine. Beth.’ during the throes of passion, then said, ‘Let me take care of you,’ he was still unwilling to commit? WTF? Beth’s heart filled with dread that perhaps she was another notch on his bedpost when he walked away.

Beth was the perfect heroine. She had a fierce streak of independence, although not being a confrontational type of person, she reached a point where she did call Theo out about his proclivity. Having to work for Theo, Beth was well aware he was a player, though that did nothing to sooth the butterflies she felt every time he was near. In spite of the fact that Beth had survived a bad break-up, she had not closed herself off to love. In fact she had set her standards high. She wanted a love like her parents enjoyed. In other words Beth still believed in fairy tales. I found this story an enjoyable, quick read with a lot of sizzle. Oh, la, la.

Format/Typo Issues:
I noticed a small number of proofing issues, nothing that threw me out of the story.

Posted by BooksAndPals at 8:58 AM