Reprise Review: Witches and Bandits and Swords (Oh, My!) by @DominicOReilly 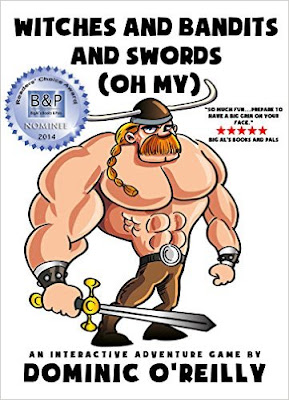 Description:
A sea voyage to trade spices with a distant land promised great fortunes for you and your friends. However, a vessel flying a pirate standard had other ideas. How well can you deal with the unexpected? Find out in this create-your-own adventure!

Author:
Dominic O’Reilly lives in Manchester, England and has many temporary jobs, all including the typing up of very mundane, and totally uninteresting, information. When he needs to escape from the mundane, he writes. The genre depends on his mood at the moment. Dominic has a blog you can visit and also a page at Deviant Art.

Appraisal:
Anyone remember Zork, one of the first interactive computer adventure games? I do. I played it while I was in college on one of those ancient Apple computers – back before they were Macs, back before they came in colors. Way back… And I loved it. It was my first experience with just how addictive a computer can be. Well, I think that this author probably grew up with Zork, and loved it, too.

The book has 3 chapters, and if I understand it correctly, you can ‘save’ your adventure, when you inevitably end up getting killed, by jumping to the next chapter (as opposed to starting over). So, in effect, you get three ‘lives’. I’ve read a few ‘create your own’ adventure Kindle books, and this is more elaborate, with a greater number of options than the others I’ve read (not to mention having a much more wicked sense of humor).
Highly recommended, if you have a good sense of humor, and even more so if you can remember playing Zork.

FYI:
This is very family-friendly. The humor is snide, but not mean. The ‘baddies’ are bad in name only. Even getting killed is an opportunity for the author to poke fun at the reader.

Added for Reprise Review: Witches and Bandits and Swords was a nominee in the Fantasy category for B&P 2014 Readers' Choice Awards. Original review ran May 24, 2013.

Format/Typo Issues:
In all the jumping around I did during my game, I saw only one minor typo, so I’d say formatting is excellent. On the Kindle, the links to select the next scenario work perfectly, and some are worth a laugh in themselves.

Approximate word count: (varies – this is a create-your-own adventure)

Posted by BooksAndPals at 1:46 PM

Thanks a lot for reprising your review of this. It's the only good review I've had (the only review, full stop, in fact). And, as you can see from the new cover, I've been mining it for all it's worth!

So much so that, I've recently teamed up with a Greek coder, and we're in the process of making it into a free Flash game. So, hopefully in 2017, you'll be able to google the title and play an all-singing, all-dancing version of this.

PS Yes, I did play Zork on my dad's Spectrum. Didn't get anywhere with it myself...