The Private Sector by @LeighMLane 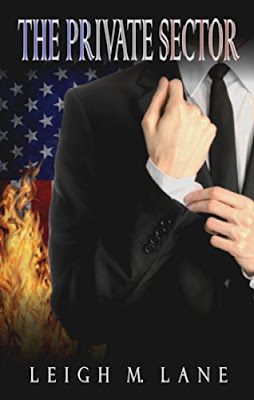 Description:
“The world of corporate greed runs rampant after the government's dissolution has left police, fire, and all other services in the hands of privatized businesses and wealthy investors.

John and Dianne Irwin are doing everything they can to shield their son, Junior, from the world's ever-expanding corruption. Dianne's junkie sister and her clueless entitled parents don't help. Even more, Dianne's livelihood as a painter has been deemed obsolete, and the tighter money gets, the closer they find themselves a mere tragedy or illness away from ruin.

With the class divide ever widening, debtor prisons for the lower and middle classes overflowing, disease ravaging the country, and resources running dry, the Irwins must survive the battleground generated by those who would crush the lower classes for their own gain and those who've waged a war against them, against a corrupt system ruled by The Private Sector.”

Author:
“In addition to writing dark speculative fiction for over twenty-five years, Lisa (Leigh M.) Lane has sung lead and backup vocals for bands ranging from classic rock to the blues, performed the National Anthem for the opening of a Dodgers game, dabbled in fine arts, worked in retail management, earned her black belt in karate, and accrued a moderate level of expertise in animal care and behavior. She holds a BA in English and graduated from UNLV Magna Cum Laude. She currently resides in the dusty outskirts of Sin City with her husband, an editor and educator, and one very spoiled cat.”

Appraisal:
The main element of a dystopian novel is to take a political direction the world or a particular country is moving and imagine the negative repercussions of going too far in that direction. In the US those who are political conservatives sometimes believe that a for profit business is preferable to accomplish certain tasks that are traditionally done by a government agency. For some things, trash collection for example, this can work out okay. But at some point it goes too far.

The world chronicled in The Private Sector is way past that point. The government has been dissolved and all services are provided by private companies. Competing police and fire organizations serve (to stretch the meaning of that word) the same areas with the residents hiring and paying the agency they choose. The result isn't pretty. I found myself thinking the premise wasn't credible because no one would think going to this extreme was a good idea. Then I considered some of the political rhetoric I've heard in the past and decided it wasn't that far-fetched, after all.

Posted by BooksAndPals at 8:11 AM

Thank you for the lovely review, BigAl!

Thanks for dropping by, Leigh.