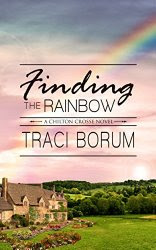 Traci also adores all things British. She even owns a British dog (Corgi) and is completely addicted to Masterpiece Theater--must be all those dreamy accents! Aside from having big dreams of getting a book published, it's the little things that make her the happiest: deep talks with friends, a strong cup of hot chocolate, a hearty game of fetch with her Corgi, and puffy white Texas clouds always reminding her to ‘look up, slow down, enjoy your life.’"

“Holly Newbury’s life is on hold in the cozy English village of Chilton Crosse. While her friends are marrying, having children, and embarking on successful careers, Holly is raising her three younger sisters and working part time at the village art gallery. Her life feels incomplete, but family is more important to her than anything. Then a film crew’s arrival galvanizes the community, and Holly becomes fast friends with Fletcher Hays, the movie’s love-shy American writer.

The production of an Emma film isn’t the only drama in town, though. Their father makes a choice that threatens everything she gave up her dreams for. Holly’s sisters endure growing pains. And Fletcher plans to return to America as soon as filming is over, ruining any chance of their relationship blossoming further. After years of sacrificing for others, Holly must find the courage to take a risk on a future she never dared to expect.”

For the past six years Holly Newbury, being several years older than her sisters, stepped into the role of caring for and raising her younger sisters when their mother passed away unexpectedly from an aneurysm. Their father, Duncan, struggled with depression for months and hid himself away from the family in his home office. He is still practically non-existent in family affairs.

Chilton Crosse is a picturesque English community where everyone practically knows everyone else. It was nice to re-visit and learn about more people in this town. It is big news when a film company chooses an estate at the end of town to film the movie Emma. Everyone gets in the spirit and are lucky enough to play extras in the process of filming. Emma is one of Holly’s favorite Jane Austen stories. She decides everyone should read the book since the movie is being filmed there. She organizes a book club to be held at her cantankerous Aunt Gertrude’s house to try to draw her into the town’s excitement. She even invites Fletcher Hays, the American playwright who adapted the book for the big screen, as their resident Emma expert. They become fast friends and the book club is a huge success.

Each chapter is opened with a Jane Austen quote, which ties into the story. The plot is character driven with many twists that draws different family members into the spotlight. Family secrets are exposed, which must be dealt with, a teenage infatuation goes awry, and a hidden emotional time bomb explodes. To top all of this off Holly is suddenly struck how much her life parallels Emma. This turned into a satisfying read that left a smile on my face.

This is Book 2 from the Chilton Crosse Series, however it can be read as a stand-alone story.

I was given an advance reader’s copy but I noticed no glaring proofing errors.

Thanks so much for taking the time to read and review the book. It's very appreciated! I'm so glad you enjoyed it!
Traci

You're welcome, Ms. Borum. Thank you for stopping by and commenting.

Thanks for commenting, Mary Preston. I hope you enjoy Finding the Rainbow as much as I did. :D