Widow As Butterfly Dealing with Grief and Loss / Ty Nolan 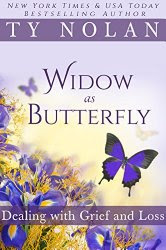 Ty Nolan is a professional storyteller and a therapist. He was asked to teach STEM (Science, Technology, Engineering, and Math) professors how to use Storytelling (a retelling of traditional Native American Stories) to more effectively communicate complex concepts about technology to a general audience. Most recently he has worked with the National Science Foundation's Flagship Project, Synergy.

He currently lives in Arizona near South Mountain Community College, where one can be certified as a storyteller at one of the only Storytelling Institutes in the United States.

“The author studied with Elisabeth Kübler-Ross in working with the various aspects of Death and Dying. His book, Coyote Still Going: Native American Legends and Contemporary Stories received the 2014 BP (BigAl’s Books and Pals) Readers’ Choice Award for Short Story Collections and Anthologies.”

“There are two things the dying can take with them when they go. One is the Story of how to deal with leaving life behind and what is believed to happen next. The other is Love. This book shares the gifts also given by the dying to the living—the power of memories. The Stories the living take with them help make sense of their own lives and relationships. Trained as a traditional American Indian Storyteller and One Who Buries, the author has had decades of experience in helping in the final ceremonies for the dead and in comforting the survivors. Traditional Native American legends and rituals that provide a framework for understanding death and dying are woven in with systemic family therapy and psychological studies of bereavement—and healing.

The title—Widow As Butterfly—refers to a traditional Sahaptin legend. Just as life repeats art, this Story sets a pattern the Sahaptin people use in accepting the loss of a loved one.

The author's personal history led to a major keynote for the International AIDS Conference in Amsterdam and over thirty years of working with families, children and Hospice programs on a national and international level in coping with grief and loss. Importantly, the work also examines the needs of health care professionals—who cares for the caretakers?”

I pulled this from the introduction of Widow As Butterfly. I shortened it some but thought it was important to note:

“This book is an outgrowth of my many years of working with Death on a number of levels… It reflects the many workshops on Grief and Loss I have led across the United States, Canada, and Europe… The approaches and techniques described in this book don’t lessen the pain of loss. That’s part of our humanity.”

I was impressed and am in awe of Ty Nolan’s wisdom in how he approaches his work and most likely people in general. He seeks to learn each patient or clients own personal story through their culture, nationality, religion/beliefs, and history to provide a map to follow or use as a guide. Everyone’s is different in one degree or another and the map is fluid/changeable to fit ones needs. Not only does he tell Native American Stories but also accesses Greek, Roman, Egyptian, Celtic, and other Myths to relate. There is a Jewish story that I particularly liked, it made me smile.

Mr. Nolan also talks about perspective and relates stories of those he has helped guide through their grief or depression. No matter what kind of loss is being dealt with, I found his insights into people’s soul remarkable.

Another story I really enjoyed was Dancing With Dash-Kayah, it is another traditional Sahaptin story retold by Ty Nolan. Dash-Kayah is a big scary monster, which can represent grief, addiction, or disease. A clever boy overcomes the monster to make it more manageable. This is the way Mr. Nolan teaches. I would highly recommend this book for everyone, grief-stricken or not. It’s never too late to learn your story.

I noted a small number of proofing errors that included missing, extra, or wrong words.