What Goes Around, a guest post from John L. DeBoer, author of Skeleton Run 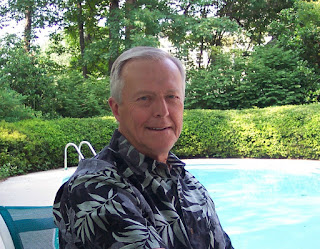 My novel, Skeleton Run, deals with a secret about a tragic accident that is revealed some twenty years later and threatens the lives of those responsible for it. Al, you’d asked me if I had an episode in my life that came back to haunt me which gave me the idea for the story. I immediately thought of something that happened to me five years ago that re-emerged this year. No, it wasn’t tragic – in fact, it made me laugh out loud – and it wasn’t the stimulus for my novel. But it does have a message-in-a-bottle quality to it that I think, in a way, has a moral in it applicable to writers.

I had self-published a novel five years ago. I was excited about it, of course, and eagerly started lining up book-signings around my town in North Carolina. At my first one, I sold twenty books and thought that was great. A similar result occurred at my second signing, and I could see literary success just around the corner. Alas, that was the pinnacle of my rise to fame and fortune with that book, and being clueless about aggressive marketing techniques, I figured I needed to write a more-appealing novel that would attract a real publisher. So, I essentially forgot about that early venture and went to work writing new stuff.

Five years later, my wife drags me to her high school reunion in New Jersey, and there I meet her old friends. So I’m talking with one of her best buds from those days, and we share info about each other. I tell her I had retired from a surgical career and am now a novel writer. She’s intrigued with that, because, she tells me, she loves to read, and she wants to check out my books.

Two weeks after returning to North Carolina, I get an e-mail from this woman, who tells me she has ordered all of my books from Amazon, but the cost of one of them made her pause. I had to chuckle at that; the book to which she referred was that self-published novel. I had taken it out of circulation to revise it for my new publisher, but it was still shown as available – at an outrageous price. I tell her not to buy it, that I could send her a copy I still had lying around, or she could wait for the new version.

A month later, she e-mails me saying she had read all my other books and went ahead and ordered that old one. And it was an autographed copy! How could that be? I wonder. But it was made out to “Gloria,” which wasn’t this friend’s name. Gloria happens to be the name of my mother-in-law, who I know never read the book. What the hell is going on?

She sends me a photo of the inscription, and sure enough, it’s my writing. And then it hits me. Someone from one of those book-signings five years earlier had bought the book, read it, then sold it used to Amazon. Obviously, this Gloria didn’t feel it had collector’s value!

So the moral of this story to authors? You can’t run from the past! Those early experiments never go away.