HealthScare: Why Health Care Is NOT About Your Health / Fritz Scheffel Reviewed by: BigAl 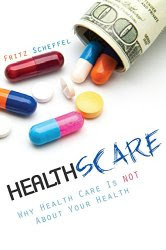 “Fritz Scheffel spent forty years working in various healthcare jobs--spending twenty of those years as an active retail pharmacist, or pharmacy owner, working with doctors, drug company representatives, nursing homes, health insurance companies, and the public. He gained more experience while selling computer systems to retail, hospital, and institutional pharmacies. Additionally, he worked as a business broker listing and selling pharmacies. During his time in the healthcare industry, pharmacy evolved from a free-enterprise business environment to one controlled by health insurance companies and government entitlement programs.

Fritz suffered a stroke in the spring of 2012 and learned he was a diabetic, which led to firsthand experience of just how the healthcare industry has deteriorated. Determined to speak with people about the industry, Fritz wants to show that a better performing healthcare industry is attainable, and that it will be easier if certain other entities were not involved.”

“How well do you understand what defines your health? Can you wake up one morning and make the decision to go purchase good health? Where would you go? Can you tell Santa Claus that you want him to bring you the gift of good health for Christmas? The federal government and health insurance companies want us to believe that having 'health care' can make you healthy. They have presented health care as a means to your health, but it has turned out to be a con job to take over each American’s access to medical care—decimating health professionals’ ability to treat their patients effectively and at a reasonable cost.”

Buried among the loads of nonsense, contradictions, biased opinions, unsubstantiated rumors, and impractical ideas that make up the majority of Healthscare are a few reasonable points. One is that the system of providing healthcare in the US is broke. (Few would argue that. The differences in opinion are how to fix it and whether recent changes are helping more than hurting.) Another is that good health, or at least the best health possible for any particular person given their luck in the genetic lottery, is partially dependent on the individual, not just services provided by medical professionals. Last, the author has a definite pet peeve that the term “health care” has become synonymous with health insurance. Obviously health insurance is the means people use to pay for or finance the actual health care services and there is a good case to be made that the system of health insurance has been a significant factor in increasing costs.

However, that's a few reasonable points and a whole lot of solid waste product. I'll briefly hit on just a few representative points to avoid writing an entire book in rebuttal.

Throughout the book it was clear that the author is of the opinion that government is bad, business is good; regulation is bad, and market forces are good. There were exceptions. (The feeling that compounding pharmacies aren't regulated enough is one example of an exception. He also seems to ignore that market forces reacting to drug shortages caused by big drug companies is the reason for these to exist.) Even when he thought business did something bad (large drug companies in one instance), he blamed it on the government, not the businesses.

I won't argue that government is all good (it obviously isn't), nor that businesses never do good. However, I don't trust private businesses which have a duty to maximize their profit within whatever laws limit them to have my best interests at heart. Do you?

Then we've got this quote:

This kind of thinking comes right from socialism, liberalism, progressivism, communism, and Marxism—pick one.

Anyone who thinks these are the same needs a better dictionary or a better
concept of the shades of gray between black and white. If the quote had you nodding in agreement, consider this alternative.

This kind of thinking comes right from fascism, conservatism, regressivism, and anarchism—pick one.

How fair does that seem?

Next consider this claim:

If we could successfully get rid of Obamacare, everyone would benefit, including the poor. Without the federal government involvement in health care, states would be better positioned to take care of the needy in their state.

To which I would ask, then why didn't they? To be fair, one state, Massachusetts, did do something along these lines that resembled the Affordable Care Act, popularly known as Obamacare. But why does he think that those states that had done none of these things, some of which are actively doing just the opposite today, would magically change direction if the ACA was repealed? If this kind of illogical wishful thinking is your thing, if you'd like to read fear-mongering, anti-Obamacare predictions (many that have already been debunked or turned out wrong), then this is the book for you. Otherwise, take a pass.

A small number of typos or other proofing errors.

Rating: * One Star
Posted by BooksAndPals at 8:00 AM