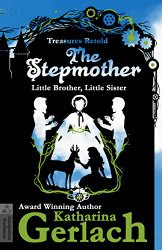 Availability
Kindle US: YES UK: YES Nook: NO  Smashwords: NO  Paper: NO
Click on a YES above to go to appropriate page in Amazon, Barnes & Noble, or Smashwords store

“Katharina Gerlach was born in Germany in 1968. She and her three younger brothers grew up in the middle of a forest in the heart of the Luneburgian Heather. After romping through the forest with imagination as her guide, the tomboy learned to read and disappeared into magical adventures, past times or eerie fairytale woods… For a while, reality interfered with her writing but after finishing a degree in forestry and a PhD in Science she returned to her vocation. She likes to write Fantasy, Science Fiction and Historical Novels for all age groups.

At present, she is writing at her next project in a small house near Hildesheim, Germany, where she lives with her husband, three children and a dog.”

Even with her powers as a witch, Isabel cannot find a trace of her stepchildren. Desperate, she crosses the Old Forest, filled with as much malignant as benevolent magic, to reach the distant mountain kingdom she left as a young girl when her magical powers manifested. She soon realizes that a sinister creature holds the unsuspecting kingdom in thrall. It will take all she's able to give to save her children and the kingdom she once loved.

What if the Brothers Grimm painted a wrong portrait of the stepmother in the original tale of ‘Little Brother, Little Sister’? The book includes a bonus story and the original fairy tale.”

Ms. Gerlach has a wonderful talent of taking these fairy tales and reimagining them without losing certain aspects of the old story. They really are a joy to read.

Isabel was a science-oriented witch, but she wasn’t the evil stepmother in the original story. Magic is slowly leaving the world at large and didn’t exist in some places any longer. Ellie, perhaps fifteen years-old, and Tobi, about eleven years-old, ran away from home under a terrible misunderstanding after their father had passed away. Isabel has been searching for them, for three years, across the countryside. Not being able to locate the children with her powers she decided to pay Bergia a visit. Isabel has grown up in the small mountain kingdom and knew it well. To get there she has to cross the Old Forest, which was still filled with magic, and arduous to cross.

Once there Isabel is able to secure a job in the palace. She feels the tingle of magic around but has trouble locating the source. She keeps her magic hidden deep inside until she can learn more. It’s a fascinating tale full of intrigue and betrayal that threatens the whole kingdom. There is also a love story, and an examination of family relationships. The characters are well developed and the search for the soul-sucking demon is intense. This story also employs a small bit of steampunk type elements that surprised me. Only a science-oriented witch would have been able to see through the disguise. I found this story highly entertaining.

The Stepmother: Little Brother, Little Sister is Book 2 in the Treasures Retold series. There is also a bonus story, Star Coins, which continues with the steampunk elements. It is a delightful story with some difficult issues. You may want to read this first before sharing with small children. The book also contains The Original: Little Brother, Little Sister by the Brothers Grimm. I really appreciate these originals being included, it’s a nice bonus.

I found no significant issues with the first and last stories. However, the story Star Coins had a few issues with wrong words being used. I don’t know if this problem is in the published edition or if it was only in the review file I was given, which is possible.