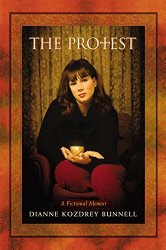 Her first job was as a girl Friday for the president of a pants manufacturing company. Eventually, she provided administrative support to a U.S. Congressman, a hospital president, and a college president, as well as her career as a high school English teacher and author.”

“Dianne Kozdrey Bunnell’s fictional memoir is inspired by the real-life religious hijacking of her two daughters, ages 10 and 12. Janey Powers has broken away from her small town fundamentalist upbringing after being seduced by her minister and is building a new life for herself and her two daughters in Washington. But her freedom has a price. She is being stalked by her former minister, Reverend Logan Churlick, mouthpiece of God, who will stop at nothing to possess Janey's heart and soul and will not hesitate to use her daughters to win her. After Churlick establishes paternity in court, Janey fights to protect her children as they become enmeshed in their battle, innocent victims of a firebombing by the blood of the lamb. Janey faces the unthinkable as she puts into play a desperate strategy Churlick could not foresee - but will it save her girls or will she lose them forever?”

When I first looked at the subtitle of this book I said to myself, “Is it fiction or is it a memoir? It can't be both.” Or can it? I'm convinced much of The Protest is fiction. Not having to stick to the truth makes for a better story. And this is a good story. Near the end of the book the protagonist of the novel makes this comment, which I think gets to the heart of the matter:

Fiction is usually a mixture of truth as the writer sees it and flaming lies. Writing is simply another means for truth to escape, besides crawling out the hole it’s eaten in the author’s belly.

As I said, this is a good story. The characters fill their roles well. We follow the protagonist, Janey, over many years, understanding where she came from, and the how and why of the difficult situation she finds herself in as an adult. The Reverend Logan Churlick is all too credible as the charismatic preacher who isn't the man of God some people think he is. The secondary characters are excellent. I especially liked Janey's sister and the man Janey eventually settles down with who both add touches of humor to the story.

My one complaint is during the middle of the story there were points where a conflict was building, on the verge of coming to a head, and the story would skip ahead, with the conflict resolved in the past. While it is possible that this worked better for the overall story arc (there are going to be a lot of ups and downs in a story covering this many years), as a reader I at times felt like I'd had my emotions built up, only to be left hanging, unable to experience the resolution. However, this was a relatively minor issue. I'd definitely still recommend the book, especially to readers interested in cults and the methods they use in controlling their members.