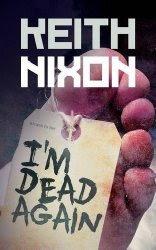 Availability
Kindle US: YES UK: YES Nook: NO  Smashwords: NO  Paper: YES
Click on a YES above to go to appropriate page in Amazon, Barnes & Noble, or Smashwords store

Keith Nixon is a busy man. Beyond the time demands of a day job and family, Keith writes crime fiction and historical fiction. You'll also recognize him as one of Books and Pals long-time, prolific reviewers. He also reviews for Crime Fiction Lover.

“David Brodie, literally once ace reporter, is on a serious downward slide with ex-wife, ex-job and ex-bank balance hanging around his neck. Until he receives a phone call. From a dead man. Soon it could be ex-life.

When the corpse of her ex-husband turns up in dubious circumstances Emily Hollowman enlists ex-KGB and current tramp Konstantin Boryakov to investigate. With stone cold killer, Mr. Lamb, in tow the pair discovers all roads lead to disgraced businessman, Gordon Dredge, the man who cost Brodie everything.

But Dredge is in trouble too, in debt to gangland boss Stevie ‘The Steroid’ Oakhill. And Oakhill has his own problems, a Chechen by the name of Adam is trying to take his business.

The hilarious follow-up to bestselling The Fix – gangsters, murder and a multitude of sarcasm await... who will die first? “

What sets Keith Nixon's crime thrillers apart from the pack isn't the tight, intricate plots (although that doesn't hurt). Instead it is two other things, at least for me. First, the characters, where even the baddest of the bad may have some redeeming qualities and the good guys are far from perfect. The other quality, especially in Nixon's debut, The Fix, and returning full force in I'm Dead Again, is a sense of humor underlying it all.

In fact, it is this last quality more than anything that justifies billing this as the follow-up to The Fix. Sure, there are a couple return characters, but in between Nixon also wrote and released a novella series featuring Konstantin Boryakov who also appears here and in The Fix.

A fast-paced and witty tale, I'm Dead Again should please fans of crime fiction. It's easily my favorite of Nixon's books thus far.

Excellent review, Al. I definitely have to check this out. It sounds like something I'd really enjoy.