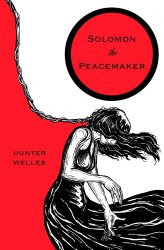 Hunter Welles is a self-described “odd-jobber” and freelance computer programmer. When he finds time to write, his favorite part of the process is reaching out to his readers and the feedback they give him regarding his craft. He lives in Bemidji, Minnesota with his wife and baby.

Vincent Alan Chell, an employee of a late 22nd Century pharmaceutical manufacturer, lives in the United States of North America. His world has been at peace for generations due to the work of a super computer, Solomon, and its human hosts.

Solomon the Peacemaker is a confession. Vincent has committed a terrorist act and is telling his story to an interrogator through 26 interview sessions.
During his narrative, Chell reveals his biography, his relationship to his first wife, Yael, and his second wife, Alma. The marriages are linked through a connection to the Preacher, the pastor of the Church of Incarnation, who is unhappy with a computer deciding the fate of the human race, even though world peace has been achieved.

The reader is drawn into the mystery of Vincent’s crime from page one until it is revealed at the novel’s end. Throughout the book Hunter Welles keeps the readers’ interest through a fast-paced first-person prose. The author creates a believable world with very real characters reacting to a society dependent on intelligent machines. Each interview session contains twists and turns in a life headed for disaster.

Any science fiction reader with a love of mystery and suspense will enjoy Solomon the Peacemaker.

I felt the ending was abrupt and resented the author for not including an afterword regarding Vincent’s fate or the affect his act had on his society.