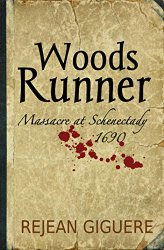 Rejean Giguere is an avid outdoorsman, adventurer, photographer and artist. He enjoys fishing, hockey, golf, tennis, skiing and snowmobiling, his V-Max motorcycle and vintage Corvette. He grew up in Canada and Europe, and enjoyed a business career in Toronto and Ottawa.

Before there was Canada or America, there was New France and New England. In the late 17th century the French and British fought for territory and riches in the new lands of North America.

On the French side, among the soldiers and the Indians fighting for their country were men called the Woods Runners. Coureur de Bois, the men who became known as Voyageurs - tough, hard-bitten adventurers who shaped the course of two countries.

I never read historical novels. So, clearly, I picked this story because of the author—not too unusual, that’s how 60% of books are chosen. I’d previously read two stories by Mr. Giguere, and they’d both been a lot of fun, but more importantly for this easily bored reader, they’d both been very different from each other and from anything I’d previously read. Woods Runner also hit home on both counts.

The action takes place in the late 1600s on the North American continent before it was named and partitioned into America and Canada and deals with the conflict between the English and French invaders and the Native American tribes that lived and thrived around the Great Lakes.

In an author’s note, Mr. Giguere explains that his family tree originated around this time and one of his ancestors was a scout who was involved in an infamous massacre at Schenectady, New York.

Had the story focused closely on the historical details of the massacre and the politics of the time, I would certainly have nodded off--did I mention I never read historical fiction? Instead, I was given a fascinating glimpse into a fictionalized life of a Woods Runner as he traded ironware for pelts with the native American tribes. When this Woods Runner offered his services as a scout and unwittingly aided in the massacre, I saw the brutality and futility from his viewpoint.

I was particularly struck by how realistically the weather and terrain of what is now southern Canada was portrayed. Ever present, Mother Nature controlled the lives and actions of the humans in the story so ubiquitously that it effectively became another character in the story. I have no idea how accurate the historical details were (and I certainly don’t plan to read a history book to find out), but the authority of the writing gives me confidence that the author truly captured life in the 1600s.

This was an engaging read that kept me involved throughout and taught me some history despite myself. If you enjoy reading historical fiction, I’m certain you will enjoy this novel even more than I did.