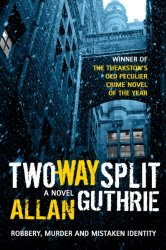 Allan Guthrie developed a taste for writing at school, he is now the author of five award winning novels. When not writing Allan is a literary agent and co-founded the e-publisher, Blasted Heath. Born on the Orkney Islands, Allan now lives in Edinburgh with his wife.

Robin Greaves is having a bad day. A PI has confirmed his wife, Carol, is having an affair with his friend and colleague, Eddie Soutar. Trouble is the three of them work together and have a long planned job today – robbing a post office. Then things go from bad to worse when Robin kills the cashier…

It’s hard to believe Two-Way Split is the author’s debut novel. This is a gritty slice of noir that develops additional layers as it progresses with plenty of twists along the way from a crime novel into a psychological thriller. Description is thin on the ground, resulting in fast paced prose where the reader is right in the midst of the action – no words are wasted.

Guthrie neatly sets off four arcs. First, he immediately creates tension and mystery when, in the opening pages, Robin meets the PI to discover his wife is having an affair. Robin reacts badly and strikes Gray. There’s clearly something dark simmering in Robin’s mind.

We then meet Pearce. He’s an ex-con, just finished a ten year stretch for murdering the drug dealer who supplied his deceased sister and is currently (albeit reluctantly) employed as a debt collector for a local crime boss. He’s big and tough. Short on temper, long on morals.
Three, there’s Kennedy, he works for Gray and under the latter’s instruction follows Robin when he leaves the PI’s office. Finally, there’s Eddie and Carol, Robin’s partners in crime, but now his betrayers as well.

Robin can barely suppress his feelings when they meet. His head is all over the place. But meet they must because they’ve been planning a robbery at a local post office. Eddie and Robin go inside, with Carol as the driver. Violence is Eddie’s key to maintaining control, but it goes horribly wrong and the cashier winds up dead, all witnessed by Kennedy. The cashier, howeve,r is Pearce’s mother and he sets off to gain revenge on her killer.

If this sounds horribly complicated, that’s my fault, because it’s not. Guthrie manages the strands well and gradually draws them together. He employs a ‘ticking clock’ with each section opening with the time to enhance the pace and tension. However, this novel is much more than greed, murder and revenge. Robin’s mental state deteriorates and Two-Way Split then encompasses his collapse and the aftermath, whilst in parallel Pearce is closing in, aided and abetted by Kennedy and Gray for their own ends. I’d love to say more here, but I don’t want to give the story away.

I thoroughly enjoyed Two-Way Split. The characters are well drawn, the dialogue is excellent. The sense of place is almost entirely up to the reader to create, as mentioned previously the descriptive element is kept to a minimum. Just enough of a brushstroke to give a sense of the background. Difficult to do, but Guthrie pulls it off. All in all an excellent read.