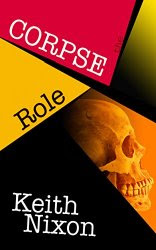 Keith Nixon is a busy man. Beyond the time demands of a day job and family, Keith writes crime fiction and historical fiction. You'll also recognize him as one of Books and Pals long-time, prolific reviewers. He also reviews for Crime Fiction Lover.

“Not everything that gets buried stays buried... sometimes things have a nasty habit of resurfacing…

When the corpse of a security van driver implicated in an unsolved £1.2 million heist turns up in a shallow grave two years later it’s just the beginning for Detective Inspector Charlotte Granger.

She embarks on an investigation that takes her into dangerous territory – a world of corrupt cops, unscrupulous private investigators, local gangsters and an investigative journalist who'll stop at nothing to get his story. Meanwhile events from Granger's own past are threatening to come back and haunt her...

As people are murdered to silence them and vital information vanishes from files, can DI Granger get to the truth? And if she does, what will that truth reveal? “

Keith Nixon has been a busy man with new books released in the last few months in both his historical fiction and crime fiction series, and now this one. It isn't clear whether The Corpse Role is a one-off or the first of a series featuring Detective Inspector Charlotte “Charlie” Granger, but I'm pulling for the second. (There are reasons why this could easily go either way. I won't discuss these since they are spoiler-ish.)

The Corpse Role has two main time-lines, with the story switching back and forth between the two. The present, where the body of Paul Wheeler is found and Charlie begins her search for who murdered him and why, the second in the past where the events leading up to and surrounding Wheeler's death play out. Throughout the reader knows some things before Charlie figures them out, but seeing how it all fits together isn't always apparent, even when we think we know. Who is good – make that not as bad as others – is never clear, and keeps the reader guessing. I was also curious as to the significance of the title or if there even was any meaning. Part way through, I had a theory. It was wrong. Nixon held off on that answer to that question until the last word. Literally.