Pennies for the Damned / Edward Lorn 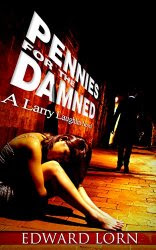 “Once upon a time, during a session of show and tell, a seven-year-old Edward Lorn shared with his class that his baby brother had died over the weekend. His classmates, the teacher included, wept while he recounted the painful tragedy of having lost a sibling. Edward went home that day and found an irate mother waiting for him. Edward’s teacher had called to express her condolences. This was unfortunate, as Edward had never had a baby brother. With advice given to her by a frustrated teacher, Edward’s mother made him start writing all of his lies down. The rest, as they say, is history. Edward Lorn and his wife are raising two children, along with a handful of outside cats and a beagle named Dot. He remains a liar to this day. The only difference is, now he’s a useful one.”

Lorn is the author of several books including Life after Dane, a nominee in the 2014 BigAl's Books and Pals Readers' Choice awards.

For more about this sick individual, visit his blog.

“Ex-hitman Larry Laughlin got out of Mexico alive, but now he’s a haunted man. The final step to laying his ghosts to rest requires killing his newly paroled father. Before he can take action, a trio of killers break into Larry’s house, and he overhears their scheme to murder his brother, Jaime. Old habits kick in, and Larry emerges the sole survivor. But while he’s gathering hidden funds to finance his plans, he’s ambushed by an abused teen named Brooklyn, who refuses to be left behind.

Larry and Brooklyn set out to save his brother and complete his patricidal task, but one misstep drops yet another aching tragedy on Larry’s burdened shoulders. Nearly mad with his hunger for vengeance, Larry seeks his final nemesis in the heart of New York City. But what he finds will threaten more than just his life: Larry Laughlin damned himself long ago.”

I've been eagerly anticipating Pennies for the Damned, the followup to Lorn's first book featuring Larry Laughlin, Hope for the Wicked. By way of disclaimer, this isn't because I'd heard a rumor that a character named for me suffered a horrible death in this book, although that turns out to be true with me losing some largely unused body parts in the process. It's because I like the character of Larry Laughlin so much.

By most standards, Larry is an evil man, with corpses routinely piling up in his wake. He's a damaged human, and he knows it. However, he's learned to focus his evil deeds on those who could be considered deserving. As the bodies stack up I just keep repeating, “it's only a book, and they had it coming anyway.” It usually helps.

In this latest tale Larry reconnects with family in various ways, discovers some skeletons in the closets of past allies, and learns how it feels to be a dad. Another excellent installment in the continuing saga of Larry Laughlin.

Take the disclaimer from the book's Amazon description seriously.