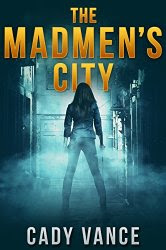 Cady Vance is currently a PhD student. She has written several books, and enjoys speculative fiction. Read more about her at her website.

Gwen Kane is ready to join in the family business – being a vigilante (also known as superhero). Yet, during a training session, her father is arrested for a murder he did not commit. In an attempt to clear her father, she befriends the other vigilante in town, and discovers his secret.

Vigilante … super heroes. They can be the same person, but usually it depends on which side of the situation you are standing. Gwen Kane’s father goes from super hero to vigilante to murderer in just a matter of hours, and she wants to clear his name.

Towton City is run by two crime families, which would love nothing more than to see Gwen Kane’s father stay in prison and make the street just a little more accessible for them.

To get to her goal, Gwen befriends the other vigilante in town, who happens to be someone who she already knows – and someone with a lot of secrets.

The dynamic between Gwen and Silas was great. They had a relationship that made you want to root for them every step of the way, even when the situation got complicated. Also, their relationship didn’t get in the way of the overarching story.

However, the book was a bit darker than I had expected, but nothing that would have made me put down The Madmen’s City.