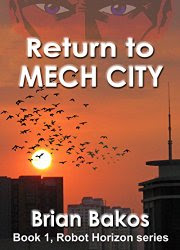 The end of the world as you've never seen it before. Life goes on in Mech City, but it is no longer human.
A sinister Roboto Fascist regime has taken hold which will destroy everything of beauty inherited from the human precursors. Only Winston Horvath, scholar model robot, and his unlikely allies stand in the way.

Brian tells us about himself: “I like to write and I like to travel. I'm from the Detroit area originally and try to see other places around the world as often as possible.
Not much more than that. Anything else I have to say comes out in my books which are all fiction - mostly for kids, some for adults. All of them are fanciful and designed to take you in new directions. If you want to know more, please contact me through my website.”

This is a light-hearted twist on dystopian sci-fi. Now there’s a sentence you don’t often read . The novel is set in a future time where robots are common and serve as sophisticated servants of man. We join the story as the last few humans are weeks from dying or already dead from a virus. The absence of humans leaves a void for the robot population. Lacking a raison d’etre, the metal men are inclined to commit suicide, until an aberrant robot assumes a controlling role and instigates a crude fascist society.

The main character—Winston, a scholar robot—is prevented from jumping head first out of a high building because on his master’s deathbed she instructed him to preserve his memory banks, which contain a vast store of human historical documents. He has a mission to preserve human knowledge. The story follows Winston as he grapples with fascism and undertakes an Oz-like journey to find a missing robot head.

I had fun with the story. The robots are heavily anthropomorphized—closer to cartoon characters than Isaac Asimov’s versions. The tale is told with a tongue firmly lodged in one cheek. For example, Winston has a robot love interest that yearns to consummate their relationship except Winston lacks a fundamental piece of equipment between his legs—poor Winston.

Plenty of action, even if some borders on the absurd. A prime example of a story you’d only find on an indie bookshelf.