Review: The Prophet of Marathon by Bob Waldner 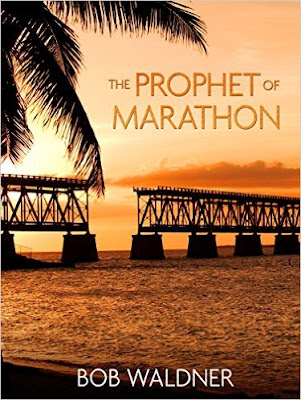 Genre: Mystery
Although James Bennett comes from a moneyed family, he’s never put his Ivy League school education to much use. When he drifts down to Marathon in the Florida Keys, a smooth-talking ex-televangelist John Wainwright takes an interest in him. James spurns an invitation to grow up and finally join his family’s business on Wall Street in favor of staying in Marathon to help Wainwright rebuild his church. But all is not as it seems.

Author:
Armed with degrees from Duke University and the University of Michigan Law School, Bob Waldner moved to New York City many years ago to seek his fortune. Not being an adept fortune-seeker, he started writing fiction. He published his first novel, Peripheral Involvement, in 2014, and his short stories have appeared, or are scheduled to appear, in The Saturday Evening Post, Pinball, theEEEL and Mulberry Fork Review. He continues to practice corporate law in Manhattan, where he lives with his wife, Erinn, and his two daughters, Maureen and Madeleine. You can find him on the web at Bob Waldner Books.

Appraisal:
This is a first person account told from James Bennett’s perspective. I could easily have disliked Mr. Bennett. After all, he has been given every advantage, and yet he spurns his options for an aimless life. So, it’s credit to the author that James’s flaws made him seem more real to me.
The story moves along at a decent clip and is told sequentially as we follow along with James’s involvement with Pastor John Wainwright. For this reader the path the story took seemed a little too predictable, and I never felt concerned for James’s wellbeing. The decisions he makes are contextually logical, but things just worked out too easily. I suppose that was in character, but it did leave me wishing I’d seen consequences to his actions that could have produced more internal growth from the main character.
Buy now from:            Amazon US     Amazon UK
FYI:
Format/Typo Issues:
Clean copy.
Rating:  *** Three  Stars
Reviewed by: Pete Barber


Approximate page count: 301 pages
Posted by BooksAndPals at 9:00 AM

We offer expertise drawn from years of experience in the European incorporation market.By applying this experience and using our excellent network of country representative offices, legal and financial contacts we can assist you with company formations in all 26 countries throughout Europe.See more at: European Company registration online