Review: A Billion Gods and Goddesses: The Mythology Behind the Pipe Woman Chronicles by Lynne Cantwell 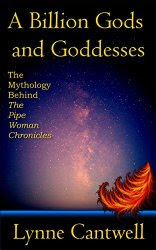 Whoo hoo! Thanks for the kind review! :)

You are welcome, Ms. Cantwell. I have to apologize for that FYI comment. That was meant for BigAl, LOL! I can't believe he didn't edit that out. *blush*

I'm a big fan of Lynne Cantwell's Pipewoman Chronicles and related series. They appealed to me from the outset because of their use of mythologies. I shall certainly check this out.

Thanks for dropping in and commenting, judimoore. I think you will enjoy this addition to Ms. Cantwell's series.