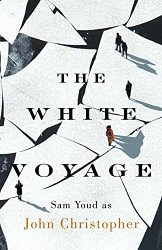 Dublin to Dieppe to Amsterdam. A routine trip for the cargo ship Kreya, her Danish crew, and handful of passengers. Brief enough for undercurrents to remain below the surface and secrets to stay buried.

When a violent storm disables the vessel, the crew and passengers are forced to face their humanity and either pull together or face disaster.

Sam Youd was born in Lancashire in April 1922, during an unseasonable snowstorm.

As a boy, he was devoted to the newly emergent genre of science-fiction: 'In the early thirties,' he later wrote, 'we knew just enough about the solar system for its possibilities to be a magnet to the imagination.'

Over the following decades, his imagination flowed from science-fiction into general novels, cricket novels, medical novels, gothic romances, detective thrillers, light comedies ... In all he published fifty-six novels and a myriad of short stories, under his own name as well as eight different pen-names.

He is perhaps best known as John Christopher, author of the seminal work of speculative fiction, The Death of Grass (today available as a Penguin Classic), and a stream of novels in the genre he pioneered, young adult dystopian fiction, beginning with The Tripods Trilogy.
Appraisal:

White Voyage’s premise is far from new—place a group of strangers in a life threatening situation and see what happens—yet the author’s prose flowed so smoothly, and his characters felt so true, that I really enjoyed the journey.
The story rolls along at a sedate pace, but even this impatient reader was never tempted to skip-read. The interaction between the characters and the feeling of impending doom that hangs over the novel kept me engaged. I wanted to know who the winners and losers would be. Who would unravel? Who would dig deep and find the will to overcome seemingly insurmountable obstacles?
And I had to wait until the end to find out—as it should be.