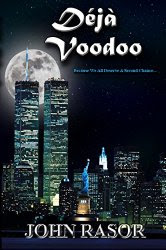 “Deja Voodoo is a 20th century time travel story. Ben Collins realizes that he has lived his life before, and that he remembers most of it. After experimenting successfully with changing his own life for the better he moves on, trying to change events on the world stage. However, the universe always has a way of maintaining its balance. Follow Ben as he defies that balance and ramps it up - from changing his own life all the way toward preventing the events of September 11, 2001 - no matter what it may cost him.”

John Rasor is the author of three previous books, Roadkill, How Lost Got Lost, and A Brief History of Time Travel. He grew up in California during the 50s and 60s, served in the armed forces, and had a professional career in manufacturing and aerospace. During his later years he enjoyed a job as a Hollywood messenger where he mined interesting inside information for his time travel book. He recently moved to Arizona to be near his adult children and grandchildren.

For more, visit his website. John promises those who go there either today or tomorrow (2/26 or 2/17/2016) can enter a giveaway of some kind.

Deja Voodoo is a time travel story with some aspects of other science fiction/time-travel stories I've read, but more than enough unique aspects that I never felt like it was a rehash, but unique in its own right. The premise, that the protagonist Ben is living his life over again, but sometimes remembers what happened the first time around. Or is it the last time and he'd been repeating this life over and over? I don't know about you, but I might be willing to try a do-over.

Of course if Ben changes one thing, that can change the path of his life and some of those around him. Yet, he soon discovers that eventually the world puts things back into balance, or so it seems, leaving him back at some point in much the same position as before. Ben also figures out that anonymous tips to law enforcement is an excellent way to stop some of the worst serial killers of his lifetime when they're barely getting started. Then he gets the idea of trying to prevent one of the biggest world-changing events of our time, September 11, 2001.

As I was reading the book there was something bothering me and I was having a heck of a hard time figuring out what it was. I considered the possibility that Ben as the narrator was painting himself in too good a light. Nope, that's not it. He was much harder on himself for mistakes. I finally came to the conclusion that the dialogue sometimes seemed a bit off. Once that finally sunk in, it stopped bothering me. I guess I decided Ben should be cut some slack for not remembering exact verbiage from two entire lifetimes and the thought process this sends your mind reeling down was an interesting exercise. (What if this was possible? Would you want it to happen to you?) It was too compelling to stop reading.

Oh, this book is FREE today on Amazon. I picked it up. :D