Review: The Reluctant Terrorist by Harvey A. Schwartz 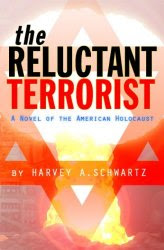 “Could the Holocaust repeat itself in America? Harvey Schwartz, a leading civil rights lawyer, returned from representing two Saudi detainees at Guantanamo Bay and wondered what it would take for America to turn on her Jewish citizens, as had happened historically in Spain, in England, in France, in Germany. His novel, The Reluctant Terrorist, resulted.

An atomic bomb destroys Tel Aviv, severing Israel. Surviving Israeli Jews are herded into refugee camps managed by Palestinians as Arab armies take over the country. The United States, demoralized by years of futile military actions in the Middle East, lacks the will to intervene. Two ships carrying thousands of Jewish refugees limp into Boston harbor, only to be turned away by the United States. As the ships are to be returned to the new nation of Palestine, Boston Jews are forced to decide whether they will use violence to prevent a repetition of America's rejection of German Jews before World War II. Primo Levi's plea of 'if not now, when' suddenly becomes an immediate decision for Jews to make, and for America's non-Jewish majority to react to. This sets the stage for increasingly severe hostilities between the government and American Jews, including bombings of shopping malls, a Million Jew March on Washington and the establishment of detention camps for hundreds of thousands of Jewish 'enemy combatants.'

The Reluctant Terrorist presents a plausible future in which the groundwork laid by the Patriot Act, Homeland Security, color-coded terror alerts and compromises on civil liberties blossoms against America's Jews.”

“Harvey A. Schwartz is a leading Boston civil rights lawyer. He has tried hundreds of civil rights and free speech cases in the state and federal courts and before the United States Supreme Court, with clients including neo-Nazis, drug reform organizations, hundreds of wrongfully-terminated employees and two detainees at Guantanamo Bay. He has taught at Boston University School of Law and Syracuse University School of Journalism. He was a founding partner in the Boston law firm of Rodgers, Powers & Schwartz LLP.”

If you finish reading this review and it leaves you feeling ambiguous, it's done its job. I feel the same way.

I'll start with the not so good part first. It's an epic story using whatever definition of epic you choose. There are a lot of characters and multiple interwoven story threads. That makes for a long (approaching 190,000 words) book. While that might rule it out due to reading tastes for some, in itself this isn't a problem However, many of those words are wasted, giving extraneous detail that does nothing to move the story along or help in other ways (characterization, setting a tone, atmosphere, etc). Some of those wasted words are telling us thoughts or feelings of the characters when their words and actions should, and usually have, already established what they're thinking.

Another problem was getting unimportant facts wrong. For example, a tropical storm that split into two that were “so close to one another that they were named Hurricane Jack and Hurricane Jill.” Clever idea, but not the way this would work. (For the uninitiated, tropical storms and the hurricanes that they sometimes become are named alphabetically starting with an A name and then a name starting with a B and so on in the order they form, alternating between male and female names. What the names will be is established in advance of the storm season.)

My last issue was with two small things done by Levi, one of the main characters, that while seemingly innocuous in real life terms, they were too obviously setups for a major twist to come later in the story. In both instances I read what Levi had done and made a note that this was going to come back to haunt him, even picturing why it was going to be an issue. It telegraphed what was going to happen, in one instance way too far ahead.

Having said all of that, the overall story is both timely and important. Much of it, apparently informed by the author's experience as an attorney who represented two detainees at Guantanamo Bay, rings true. Too true for comfort. The current political rhetoric from some, while aimed at a different subset of US citizens, isn't much different from what the author imagines here. I was surprised to see this book was released in late 2008. I sure hope Schwartz's imaginings don't continue to come true.

A small number of typos and copyediting misses.