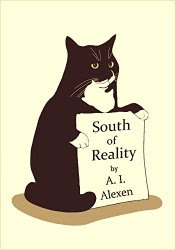 Are you aware of “The Animal Code?” I didn’t think so. It’s a set of ethics all animals live by and includes never speaking to humans. Yes, we’ve all read about acts of courage animals have demonstrated over the years that reveal their inner fortitude, but never have any of them come forth to acknowledge in speech their wisdom. Until now…

A.I. Alexen, a human, has somehow learned about “The Code” and reports to her species all about it in South of Reality. In so doing, she tells the story of Tuxedo.

Tuxedo, a handsome mercenary cat, wanders into the home of Maine and Laurianne Morgan. The humans accept him quite readily. The two dogs, Peyson and Arky don’t trust the feline interloper one bit.

The dogs believe the cat is up to no good so they juggle their guard dog duties by interrogating, snooping, and being pests until they uncover the cat’s true motivation.

A.I. Alexen grew up on a farm, an experience that inspired her to write South of Reality. In college she majored in psychology and injected that trait into her dog character, Arky.

A.I. Alexen does an amazing job bringing her animal characters alive integrating human speech into their behavior patterns. Some of the animal characters, besides the cat and dogs, include roosters, hens, rats, and goats. All embrace the “Code” creating an atmosphere of creativity for Alexen as her animals overcome adversity.

Alexen’s plot line is engaging, the scenes in the book amusing, and the setting in rural Oregon cinematographic.

South of Reality is true to its title and an engrossing fun read for children at any age.

Email ThisBlogThis!Share to TwitterShare to FacebookShare to Pinterest
Labels: 4 Star, fiction, Humor, YA